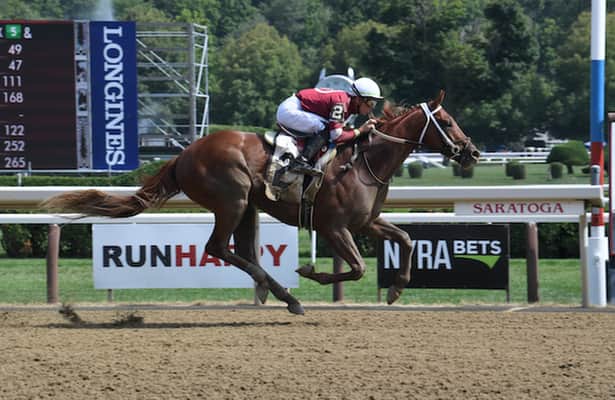 Disarm showed promise in his debut at Churchill Downs, producing a big rally from off the pace to finish third by two lengths against next-out Grade 3 Sanford winner Mo Strike. Unsurprisingly, Disarm followed up with a maiden victory of his own on Saturday at Saratoga.

Facing a promising field in a seven-furlong maiden special weight, Disarm settled no more than 2 1/2 lengths behind early fractions of 22.77 and 45.56 seconds before rallying to take command in the homestretch. In front by half a length at the eighth pole, Disarm extended his advantage impressively down the lane to win by 6 1/4 lengths in 1:24.51 seconds.

A son of hot young sire Gun Runner out of a mare by three-time leading North American sire Tapit, Disarm is bred to improve with maturity and excel over classic distances, stamping the chestnut colt as an exciting prospect.

As a son of Triple Crown winner Justify out of the Touch Gold mare Flaming Heart (previously the dam of Belmont Stakes runner-up Commissioner), Hawker is bred to run long and didn’t figure to factor while debuting in a five-furlong maiden special weight on Saturday at Del Mar.

But the John Sadler trainee outran his 6-1 odds, closing ground strongly from behind in fractions of 22.16 and 45.95 seconds to finish second by a neck. Hawker ran his final furlong in about 12 seconds and should have every chance to graduate next time. Don’t be surprised if he eventually develops into a stakes type.

California-bred sophomore returned from a 13 1/2-month layoff with a sharp performance in the seven-furlong Real Good Deal at Del Mar. Shrugging off the long break, Big City Lights carved out splits of 22.14 seconds, 44.27 and 1:09.59 before staying on to win by 1 1/4 lengths in 1:23.16. The field was deep (two-time graded stakes winner Slow Down Andy and the Grade 1-placed Finneus completed the trifecta), so Big City Lights – with his 3-for-3 record – appears poised for a productive summer/fall campaign.

Bounced back from a defeat at Royal Ascot with a determined victory in the Troy (G3) at Saratoga. Golden Pal broke poorly and ran into early trouble, but he recovered to chase down pacesetting True Valour and win by a head. Golden Pal finished fast from behind a solid pace (running the fifth furlong in less than 11 seconds) and completed the 5 1/2-furlong turf dash in a snappy 1:00.92. He’s heading into the peak of the season with a strong chance to defend his Breeders’ Cup Turf Sprint title.

Picked up his third top-level victory when posting a gate-to-wire win in Whitney (G1) at Saratoga. Early fractions of 23.64 seconds, 46.84 and 1:10.93 were ambitious for the 1 1/8-mile distance, yet Life Is Good never faltered and stayed on down the homestretch to win by two lengths in 1:48.97. He’s making a solid case for Horse of the Year honors.

Naughty Gal raced greenly in the Adirondack (G3) at Saratoga but proved good enough to prevail. The D. Wayne Lukas trainee dashed to the front through splits of 22.46 and 46.15 seconds, then extended her advantage down the homestretch despite bearing out and drifting out. Naughty Gal prevailed by 2 1/2 lengths while stopping the timer for 6 1/2 furlongs in 1:18.97, cementing her status as a promising juvenile filly.

Delivered another terrific performance in the Glens Falls (G2) at Saratoga, settling in midfield behind a pedestrian pace before rocketing the final quarter-mile in about 22.6 seconds to win under by 1 1/4 lengths under an easy hand ride. The daughter of English Channel remains dominant in long-distance grass stakes for fillies and mares and has to be viewed as an early favorite for the Breeders’ Cup Filly & Mare Turf.

Ran a gutsy race in the Whitney, chasing Life Is Good’s pace and making the first move to challenge before flattening out slightly to finish third, beaten only a head for second place. Another solid try from a talented and consistent colt.

Ran below expectations as the 3-10 favorite in the Test (G1) at Saratoga, finishing third after dropping off the early pace and rallying into contention down the homestretch. But to Matareya’s credit, she was beaten only 1 3/4 lengths while pulling 9 3/4 lengths clear of her rivals, so perhaps she can get back on track next time.

Ran well in his turf debut, rallying strongly to finish second in the National Museum of Racing Hall of Fame (G2) at Saratoga. A two-time graded-stakes winner sprinting on dirt, Wit handled the one-mile distance just fine and gained 3 3/4 lengths through the final furlong alone to finish 1 1/4 lengths behind a gate-to-wire winner. I’m curious to see where Wit heads next.