Horses to Watch: Honor A. P. can still win the Kentucky Derby 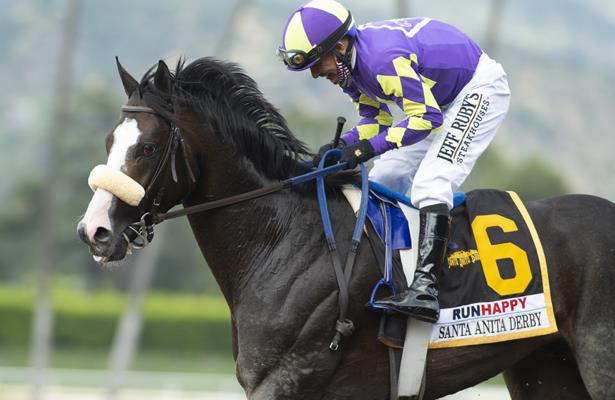 Although Santa Anita Derby (G1) winner Honor A. P. suffered a surprising defeat in the 1 1/16-mile Shared Belief Stakes on Saturday at Del Mar, I believe the beaten 1-5 favorite ran a better race than he’s being given credit for.

Honor A. P. entered the Shared Belief off a light series of workouts, and after the race jockey Mike Smith voiced his opinion that the son of Honor Code wasn’t fully fit for his first start off a two-month break: “I haven’t been able to get on him in the mornings, and I think that’s made a difference,” Smith told Del Mar. “He’s just been going along there not doing much in the mornings. I need to be on him and get more out of him. But that’s the way it is now; that’s just the way it is.”

Nevertheless, Honor A. P. ran gallantly in the Shared Belief. After getting bumped at the start by Cezanne, Honor A. P. unleashed an early rally on the first turn to gain a stalking position on the far outside. He continued to race wide down the backstretch and down the stretch before rallying late to finish second behind two-time graded stakes winner Thousand Words, beaten less than a length.

Considering Del Mar played in favor of inside runners on Saturday, Honor A. P. ran deceptively well with his wide trip. He should gain fitness from his hard runner-up effort and take a step forward in the Kentucky Derby, a scary proposition considering Honor A. P. earned a solid 102 Beyer speed figure even in defeat. I’m optimistic Honor A. P. will be ready to fire off a career-best effort on the first Saturday in September — and at a fair price too, thanks to his defeat at Del Mar.

This talented but delicate 4-year-old broke his maiden going a mile at Aqueduct in April 2019 but subsequently went to the sidelines for more than a year. The son of City Zip finally returned to action in a 6-furlong allowance race on Sunday at Saratoga, and remarkably he picked up right where he left off.

On a day when the track was playing slowly, Fort Worth tracked fractions of :22.57 and :45.10, took command in the homestretch, and edged clear to score by 2 1/4 lengths in a solid 1:09.71. Trained by Todd Pletcher, Fort Worth has the potential to develop into a stakes-caliber performer if he stays sound.

This Chad Brown-trained 2-year-old delivered a powerful performance in his debut on Saturday at Saratoga. The son of Upstart showed no hesitation racing behind rivals through an opening quarter in :22.79, then shot through along the rail on the far turn to seize command and pull away to dominate by 7 3/4 lengths in 1:09.95 for 6 furlongs.

#3 Reinvestment Risk (4/1) wins like a good thing at first asking with @iradortiz up for @TheRealChadCBr1 pic.twitter.com/R3ivP5VwGr

Reinvestment Risk’s fast final time produced a 90 Beyer, the highest figure awarded to any juvenile so far this year. Produced by the Candy Ride mare Ridingwiththedevil, Reinvestment Risk sold for $280,000 back in March, an investment that appears considerably less risky now that Reinvestment Risk has emerged among the favorites for the Sept. 7 Hopeful (G1) at Saratoga.

Considering rail runners had an edge on Saturday at Del Mar, it’s safe to say Wildman Jack faced a virtually impossible task while making his dirt debut in Saturday’s Bing Crosby (G1). A graded stakes winner on turf, Wildman Jack raced wide every step of the journey while engaged in a five-way battle for supremacy through a blazing :21.58 opening quarter.

Wildman Jack continued to duel for the lead through an intense half-mile in :44.73, and while he ultimately weakened to finish fourth, he was only beaten 1 1/2 lengths for all the glory. This was a huge effort under challenging circumstances, suggesting Wildman Jack can win his next start under more favorable circumstances.

The $3.65 million auction purchase Cezanne didn’t run badly by any means when making his stakes debut in the Shared Belief. After pressing the pace between runners, Cezanne weakened only slightly to finish fourth, beaten 1 1/2 lengths. But in a sense this was disappointing because he appeared to have the runner-up spot locked up until the final sixteenth, when he faltered and lost two places. I’ll want to see him run once more — perhaps against slightly easier company — before returning him to my watch list.

Ran evenly in Saturday’s Whitney (G1) at Saratoga, but failed to unleash a rally and settled for fourth place while beaten five lengths. You can argue Code of Honor was compromised by the slow early/fast late race shape; pedestrian fractions of :25.12, :49.74, and 1:13.36 certainly favored the pace-tracking winner Improbable, who sprinted the final 3 furlongs in a rapid :35.29 to win by two lengths. But Code of Honor never really got into contention and was weakening down the stretch, leaving me wondering why he didn’t produce a stronger finish. As with Cezanne, I’ll take a wait-and-see approach with Code of Honor before backing him again.