Horses to Watch: 1 winner, 2 new names are on the list 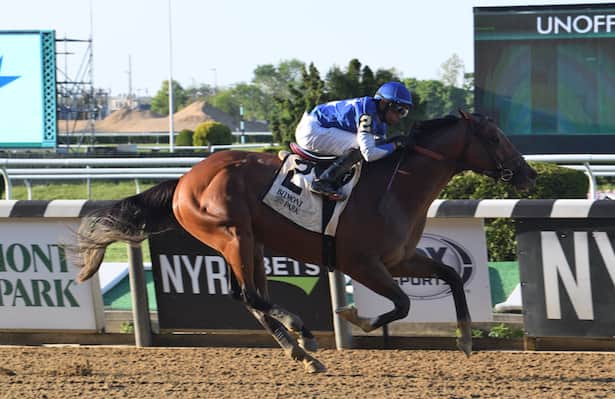 We can add Key Point to the list of exciting horses to watch from Brown’s barn. A 3-year-old New York-bred son of Into Mischief, Key Point showed promise in his debut sprinting six furlongs at Saratoga last summer, rallying smartly from behind the leaders to win by 3 1/4 lengths.

Key Point then was sidelined for 7 1/2 months, and when he returned he was beaten a nose in a 6 1/2-furlong allowance for New York-breds on Aqueduct. But when Key Point squared off against similar company in a seven-furlong dash at Belmont last Thursday, he delivered an eye-catching victory.

Indeed, Key Point proved much the best, tracking the early tempo before seizing command and drawing off to win by 6 1/2 lengths in 1:24.04. It’s unclear how high Key Point can ultimately ascend, but the 92 Beyer speed figure he posted at Belmont is promising, and it wouldn’t be surprising to see Key Point win a stakes for New York-breds in the near future.

A Group 1 winner as a 3-year-old in France last year, Rougir kicked off her 4-year-old campaign on a powerful note in the Beaugay (G3) at Belmont Park.

Making her first start for Chad Brown, Rougir was content to rate at the back of the pack early on, dropping several lengths behind slow fractions of 25.00 and 50.21 seconds. But once Rougir got rolling, her momentum was unstoppable, and she surged past the leaders to win the 1 1/16-mile turf test by three lengths in 1:43.40.

According to Trakus, Rougir ran the fourth quarter-mile in 22.66 seconds and the final sixteenth of a mile in 5.94 seconds, both solid fractions. If she maintains or improves upon this level of form, Rougir certainly could pick up a U.S. Grade 1 win before summer is over.

Last year’s Breeders’ Cup Juvenile Turf Sprint heroine had to work a bit harder than expected to win the Mamzelle sprinting five furlongs over the Churchill Downs turf course. But Twilight Gleaming ultimately got the job done, hanging on to defeat 10 rivals in a driving finish.

The bay 3-year-old was favored at 3-10 and overcame a troubled start to carve out the pace through splits of 22.35 and 45.88 seconds. She was on top by 1 1/2 lengths passing the eighth pole, and while long shots Divine Charger and Artos unleashed late challenges to make the finish close, Twilight Gleaming fought back to win by a head in 58.22 seconds.

Trained by Wesley Ward, Twilight Gleaming is a logical candidate to compete at England’s prestigious Royal Ascot meet next month. She finished second in the Queen Mary (G2) at Royal Ascot last season and later won a stakes in France, so competing in Europe is familiar territory for Twilight Gleaming.