Horses to Watch: 1 recent winner and 12 in the entries 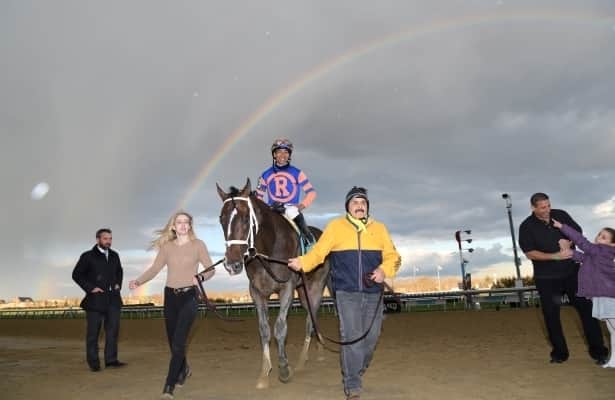 Exciting young sprinter fired off a big effort in the seven-furlong Housebuster Overnight Handicap on Monday at Colonial Downs, dashing to the lead through fractions of 22.78 seconds, 44.85 seconds and 1:08.67 before staying on to win by 2 1/4 lengths in 1:21.42 seconds. Conagher is 3-for-3 in dirt sprints this season and looks good enough to square off against graded stakes competition.

Big City Lights was spectacular in two starts as a juvenile last year, winning his debut at Santa Anita by a dozen lengths before trouncing the Fasig-Tipton Futurity by 7 1/4 lengths. These efforts produced strong Brisnet Speed ratings of 105 and 100, so if Big City Lights brings his A-game to Friday’s sixth race at Del Mar, the Real Good Deal (post time 9:29 p.m. EDT), he can visit the winner’s circle in his first start off a 13 1/2-month layoff.

Golden Pal failed to challenge after breaking poorly in the Group 1 King’s Stand at Royal Ascot, but returning to the United States for Friday’s ninth race at Saratoga, the Troy (G3) (post time 5:39 p.m.) can trigger a rebound. Golden Pal is 6-for-6 competing on turf in the U.S. and had no difficulty trouncing the Shakertown (G2) at Keeneland to kick off 2022, so expect a big effort from this two-time Breeders’ Cup winner.

Home Brew has been riding a hot streak for two-time Eclipse Award-winning trainer Brad Cox, rattling off victories in the Oaklawn and Pegasus. The latter race saw Home Brew finish fast to win by 6 1/4 lengths with a 105 Brisnet Speed rating, stamping the improving sophomore as a formidable win contender in Saturday’s eighth race at Mountaineer, the West Virginia Derby (G3) (post time 5:35 p.m.).

Hot Rod Charlie rarely runs an off race and has been competing with aplomb against Grade 1 competition since 2020. He’s set to face a tough field in Saturday’s 10th race at Saratoga, the Whitney (G1) (post time 5:43 p.m.), but Hot Rod Charlie was beaten only a head in a quick renewal of the Grade 3 Salvator Mile last time out and is eligible to move forward in his second start since returning from a productive Dubai campaign.

The morning line favorite to win the Whitney is the brilliant Life Is Good, who exits an easy five-length victory in the John A. Nerud (G2) at Belmont Park. Winner of the Breeders’ Cup Dirt Mile and Pegasus World Cup (G1), Life Is Good has tons of speed and should be tough to catch while facing a small field at Saratoga.

Matareya has developed into a terrific sprinter/miler for trainer Brad Cox, posting consecutive victories in the Beaumont (G3), Eight Belles (G2), and Acorn (G1) during the spring. Matareya trounced the Acorn by 6 1/4 lengths and will be heavily favored to extend her win streak in Saturday’s ninth race at Saratoga, the Test (G1) (post time 5:07 p.m.).

Naughty Gal failed to seriously factor in her debut at Churchill Downs, but her second start yielded a complete turnaround as the D. Wayne Lukas trainee smashed a six-furlong maiden special weight by 9 1/4 lengths. The distant runner-up returned to win her next start, and Naughty Gal earned a flashy 89 Brisnet Speed rating, stamping the daughter of Into Mischief as the filly to beat in Sunday’s fourth race at Saratoga, the Adirondack (G3) (post time 2:49 p.m.).

If anyone can upset Life Is Good in the Whitney, it’s probably Olympiad, who is undefeated in five starts (including four graded stakes) since stretching out around two turns. Olympiad has tactical speed and a strong stretch kick, which he used to beat Grade 1 winner Americanrevolution by 2 1/4 lengths in the Stephen Foster (G2) last month. This improving Bill Mott trainee might be a Breeders’ Cup Classic winner in the making.

Tiz the Bomb failed to fire his best shot against tougher competition in the Belmont Derby (G1) last month, finishing ninth while never producing a rally. But Tiz the Bomb’s turf form is solid overall (he finished second in the 2021 Breeders’ Cup Juvenile Turf), and perhaps dropping in class for Friday’s eighth race at Saratoga, the National Museum of Racing Hall of Fame (G2) (post time 5:05 p.m.), can trigger a rebound.

Although Virginia Joy finished fourth in the New York (G1) at Belmont Park last time out, she was only beaten one length while rallying into a slow pace over a 1 1/4-mile distance likely shorter than her best. Virginia Joy had previously won the Sheepshead Bay (G2) and The Very One (G3) racing 1 3/8 miles and figures to appreciate stretching out over 1 1/4 miles in Saturday’s seventh race at Saratoga, the Glens Falls (G2) (post time 3:58 p.m.).

The heavy favorite to win the Glens Falls is War Like Goddess, who romped by 3 1/4 lengths in the 2021 edition. A five-time graded stakes winner racing 1 3/8 miles or farther, War Like Goddess consistently produces powerful stretch rallies and overcame an incredibly slow pace to win the Bewitch (G3) in her 2022 debut. She’ll be tough to deny while defending her Glens Falls title.

The biggest wildcard in the National Museum of Racing Hall of Fame field is Wit, winner of the Bay Shore (G3) and Sanford (G3) sprinting on dirt. The Todd Pletcher trainee has never run on turf, but clocked a bullet half-mile over Saratoga’s training turf course in 47.8 seconds last month, suggesting the surface switch offers potential for a competitive performance.