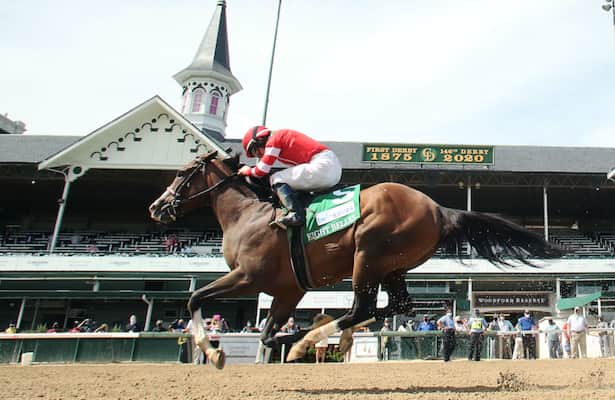 Top of the Charts

It’s impossible to say yet how talented Top of the Charts might be, because the 3-year-old gelding is undefeated in two starts and has yet to receive a meaningful challenge.

Top of the Charts was much the best in his debut sprinting six furlongs at Churchill Downs last month, carving out fractions of 21.98 and 45.11 seconds on his way to winning a maiden special weight by 2 3/4 lengths. But he was even more impressive in a 6 1/2-furlong allowance over the same track on Saturday, tracking favored Favorite Outlaw through fractions of 22.87 and 45.96 seconds before kicking away to win by four lengths in a snappy 1:15.56 seconds.

A gelded son of Maclean’s Music, Top of the Charts is trained by Brian Lynch. He looks like a stakes-caliber sprinter in the making and warrants watching this summer.

Didn’t get the best pace setup in the seven-furlong Grade 3 Chicago at Churchill Downs, settling a couple lengths behind early splits of 22.67 and 45.36 seconds before rallying mildly to finish second. The closing fractions were quick (the final three furlongs elapsed in 36.26 seconds), and pacesetting winner Lady Rocket won the Go for Wand (G3) last fall, so Sconsin’s 2 3/4-length defeat can overall be viewed in a positive light. She did finish ahead of graded stakes winners Bell’s the One and Four Graces.

Impressive Oaklawn maiden winner squared off against Top of the Charts in his return from a five-month layoff and couldn’t quite keep pace, setting the pace before staying on to finish second. Favorite Outlaw pulled 3 1/4 lengths clear of the third-place finisher, but was no match for the winner while failing to switch leads down the homestretch. I was hoping to see Favorite Outlaw deliver a victory in his comeback run, so I’ll drop him for now and keep an eye on his next effort before deciding whether to support him again.

Last year’s Alcibiades (G1) winner had every opportunity to win the Mother Goose (G2) at Belmont, racing to the front through splits of 24.09 seconds, 46.90 seconds and 1:11.36 while facing only three rivals. But Juju’s Map ran out of speed down the homestretch and weakened to finish third by 7 3/4 lengths in the 1 1/16-mile heat, so I’ll wait and see if she bounces back before playing her again.

In a bit of watch list cleanup, I’m removing 2021 Dubai World Cup (G1) winner Mystic Guide, who is retiring to stud in 2023 as a result of a soft tissue injury. With luck, the beautifully bred son of Horse of the Year Ghostzapper out of five-time Grade 1 winner Music Note will consistently pass on his talent and stamina to future generations.