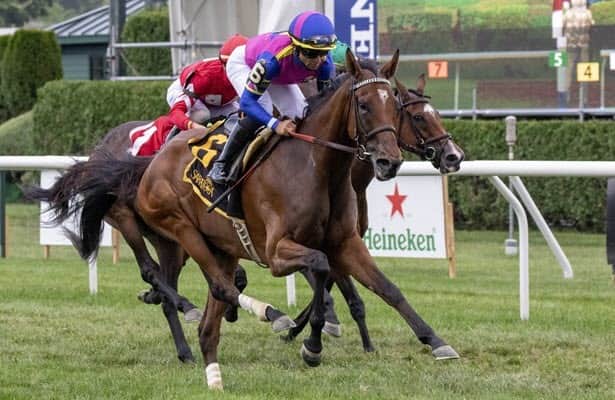 Two starts, two blowout victories. Cave Rock looked like a star in his six-length debut win at Del Mar and followed up with a powerful romp in the Del Mar Futurity (G1), which he won by 5 1/4 lengths in stakes-record time even after setting intense fractions of 21.56 and 43.65 seconds. If Cave Rock brings his A-game while stretching out over 1 1/16 miles in Saturday's eighth race at Santa Anita, the American Pharoah (G1), at 7:30 p.m. EDT, his rivals are likely running for second place.

Reigning Breeders’ Cup Turf Sprint winner Golden Pal is 3-for-3 at Keeneland and hasn’t tasted defeat in his last seven U.S. starts. Fresh off a victory in the Troy (G3) at Saratoga, Golden Pal looms as a heavy favorite to win Saturday’s sixth race at Keeneland, the Woodford (G2, post time 3:38 p.m. EDT) for the second straight year.

My watch list is loaded with horses entered in Saturday’s ninth race at Keeneland, the Breeders’ Futurity (G1), at 5:14 p.m. EDT, starting with Instant Coffee. The Brad Cox trainee rallied with determination to win a fast seven-furlong maiden special weight at Keeneland and is bred to stretch out in distance, stamping the son of Bolt d’Oro as a logical contender.

Cox has also entered Loggins in the Breeders’ Futurity and there’s a good chance the bay colt will visit the winner’s circle. Loggins employed pace-tracking tactics to dominate his debut over 6 1/2 furlongs at Churchill Downs by 8 1/2 lengths, earning a flashy 99 Brisnet Speed rating. The son of Ghostzapper is bred to run long and looks like a possible star in the making.

Whereas Instant Coffee and Loggins are stretching out significantly in distance for the Breeders’ Futurity, Lost Ark has already won around two turns, dominating the one-mile Sapling S. at Monmouth Park by 7 1/2 lengths. A half-brother to long-winded Grade 1 winners Nest and Idol, Lost Ark is unbeaten in two starts for trainer Todd Pletcher and can’t be dismissed from win consideration at Keeneland.

Love Reigns is 2-for-2 in the United States and 2-for-3 overall, with her lone defeat being a game fourth-place effort against a large field in the Queen Mary (G2) at Royal Ascot. The Wesley Ward trainee bounced back to win the Bolton Landing at Saratoga over next-out stakes winner Danse Macabre, so Love Reigns looks like the horse to beat while facing males in Sunday’s sixth race at Keeneland, the Indian Summer (post time 3:57 p.m.).

The remarkably consistent Malathaat hasn’t missed the trifecta in 10 consecutive graded stakes, along the way picking up six wins (including four Grade 1s). Malathaat exits a determined triumph against a strong field in the Personal Ensign (G1) at Saratoga and can bolster her claims for division leadership when facing a small field in Sunday’s ninth race at Saratoga, the Juddmonte Spinster (G1), at 5:45 p.m. EDT.

Moira has been a standout competing over the Tapeta track at Woodbine, most notably trouncing males by seven lengths in the Queen’s Plate. Moira set track and stakes records in that historic 1 1/4-mile event, so she may have the talent to factor while switching to grass and facing older rivals in Saturday’s ninth race at Woodbine, the E. P. Taylor (G1) at 5:39 p.m. EDT.

One of Cave Rock’s key rivals in the American Pharoah is his own stablemate National Treasure. The son of Quality Road led all the way to win his debut sprinting 6 1/2 furlongs at Del Mar but will drop blinkers for the American Pharoah, opening the door for a relaxed journey sitting off Cave Rock’s speed. In the event Cave Rock falters while stretching out in distance, the stoutly bred National Treasure is a logical alternative for top honors.

By posting victories in the Ashland (G1), Coaching Club American Oaks (G1) and Alabama (G1) alongside runner-up efforts in the Kentucky Oaks (G1) and Belmont Stakes (G1), Nest is well on her way to winning the Eclipse Award for champion Three-Year-Old filly. She can further enhance her stellar 2022 record with a victory in Sunday’s third race at Belmont Park, the Beldame (G2, post time 1:47 p.m. EDT), in which she looms as a heavy favorite to defeat older rivals for the first time.

My final watch list member entered in the Breeders’ Futurity is Newgate, who chased Cave Rock’s blazing pace in the Del Mar Futurity (G1) before weakening to finish fourth. The son of Into Mischief previously won his debut at Del Mar in sharp fashion, so if Newgate encounters a more relaxed pace in the Breeders’ Futurity, he can step forward with a big effort for trainer Bob Baffert.

Regal Glory couldn’t quite get the job done when facing males in the Fourstardave Handicap (G1) at Saratoga, finishing second behind multiple Grade 1 winner Casa Creed. But Regal Glory had previously won four straight stakes (including a trio of Grade 1s) against fellow fillies and mares, so the Chad Brown trainee should be formidable against a small field in Saturday’s eighth race at Keeneland, the First Lady (G1) at 4:42 p.m. EDT.

Victorious in eight of her 11 starts, Slammed enters Saturday’s seventh race at Keeneland, the Thoroughbred Club of America (G2, post time 4:10 p.m. EDT) off a close defeat in the Rancho Bernardo Handicap (G3) at Del Mar. The Rancho Bernardo winner was 2021 Breeders’ Cup Filly & Mare Sprint runner-up Edgeway, so Slammed held her own against a tough rival and figures to factor again at Keeneland.

An incredibly slow pace contributed to War Like Goddess’s neck defeat in the Flower Bowl (G2) at Saratoga last month. War Like Goddess didn’t get out of traffic until too late and was absolutely flying down the homestretch (running the final quarter-mile in 21.72 seconds per Trakus), so don’t be surprised if War Like Goddess defeats male rivals in Saturday’s eighth race at Belmont at the Big A, the Joe Hirsch Turf Classic (G1) at 4:20 p.m. EDT. She’s undefeated in four starts racing 1 1/2 miles and should be tough to hold off if she enjoys an encumbered journey.

Amadevil picked up her fifth stakes win and brought her record at Thistledown to a perfect 8-for-8 with an easy victory in Thursday’s Greg Veit Scarlet and Gray Handicap. The 4-year-old Ohio-bred filly led all the way to trounce her pursuers by 4 1/2 lengths in 1:10.88 seconds, delivering for bettors who backed her down to 1-20 favoritism.