Horses to Watch: 12 names to know for exciting weekend 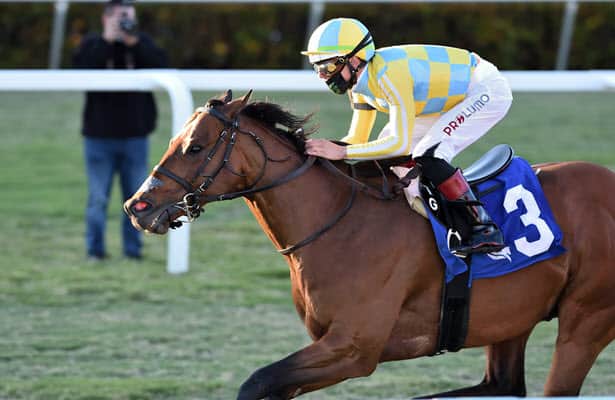 The stoutly bred Blue Cat made a great impression in his debut racing a mile on turf at Tampa Bay Downs, rallying from three lengths behind at the eighth pole to 3 1/2 lengths ahead at the finish line. Since trainer Brendan Walsh does not typically crank his runners to win on debut, this was a noteworthy effort from Blue Cat.

Blue Cat is entered to race in Saturday’s seventh race at Tampa Bay Downs, the $75,000 Columbia Stakes (post time 3:22 p.m. EST), but he has landed on the also-eligible list and will start from the far outside post if he draws into the race. The circumstances are less than ideal, but I am looking forward to seeing how Blue Cat fares if he is allowed to start. I expect him to take a step forward off his debut, and he could be a live longshot to win or hit the board at 20-1.

Subsequently sent to the sidelines, Creed will make his much-anticipated return to action in Saturday’s third race at Gulfstream Park, an allowance optional claiming race (post time 1:08 p.m. EST). The six-furlong distance is probably too short for Creed, but the $650,000 yearling has to start back somewhere, and I expect Saturday’s test to be a springboard to bigger and better things.

Dream Shake made a great impression in his debut sprinting 6 1/2 furlongs at Santa Anita, unleashing a powerful rally around the turn before drawing clear to trounce a good field by 4 3/4 lengths. The race came back fast from a speed figure perspective, so Dream Shake will test the waters against tougher competition in Saturday’s sixth race at Santa Anita, the Grade 2, $300,000 San Felipe Stakes (post time 5:45 p.m. EST).

Stepping up in class and distance against a deep field of Kentucky Derby contenders is a formidable task, but Dream Shake clearly has a lot of talent, and he is bred to stretch out. A spot on the board is certainly within reach, with potential for even greater achievements down the road.

Under the patient care of trainer John Shirreffs, Express Train has made slow but steady progress. The son of Union Rags delivered a career-best effort in the Jan. 30 San Pasqual (G2) at Santa Anita, pouncing to victory by 3 1/4 lengths, and he will endeavor to continue his ascent in Saturday’s 10th race at Santa Anita, the $400,000 Santa Anita Handicap (G1, post time 8 p.m. EST).

Express Train will have his hands full against the undefeated Maxfield, but a couple of fast six-furlong workouts suggest Express Train is not done improving yet and still has more upside.

The form of Highly Motivated’s romping victory in the Nyquist Stakes at Keeneland last fall has been strongly flattered by the subsequent performances of his beaten rivals. A perfect example is runner-up Quick Tempo, who came right back to win the Sugar Bowl Stakes in his next start.

As a result, Highly Motivated looms as the favorite to win Saturday’s ninth race at Aqueduct, the $300,000 Gotham (G3, post time 5:07 p.m. EST). It is hard to predict how the son of Into Mischief will fare in his first start off a four-month layoff, and while stretching out from 6 1/2 furlongs to one mile. But the talent is there, and Highly Motivated should find plenty of pace to chase in Saturday’s speed-laden field.

A stoutly bred son of Curlin out of an A.P. Indy mare, Idol did not get the cleanest trip in the San Pasqual (G2), checking in traffic on the far turn before re-rallying to finish third behind Express Train. Idol figures to relish stretching out over 1 1/4 miles in the Santa Anita Handicap, so with an unencumbered journey, there is an outside chance this improving 4-year-old could steal the show.

Two turf starts, two front-running victories. Jouster has shown tremendous speed for trainer Todd Pletcher, so much that she has been uncatchable since transitioning to the lawn. Fresh off wiring a 1 1/16-mile allowance race at Gulfstream Park, the daughter of Noble Mission looks like a formidable favorite in Saturday’s 10th race at Tampa Bay Downs, the $200,000 Florida Oaks (G3, post time 4:55 p.m. EST). On paper, there is not a ton of pace in the Florida Oaks, so Jouster will have every opportunity to waltz along up front and post another gate-to-wire triumph.

The San Felipe (G2) favorite needs no introduction. He is undefeated in two starts for Hall of Fame trainer Bob Baffert, including a front-running score in the Sham (G3). With his sharp speed figures and impressive workouts, Life Is Good is one of the most exciting horses in training and an early favorite to win the Kentucky Derby. If Life Is Good shows more focus on Saturday than he did in the Sham, when jockey Mike Smith felt the colt was not giving his best down the homestretch, he can win for fun and further enhance his Derby credentials.

An encouraging effort should be in the offing since Delacour wins at a 26-percent rate with horses returning from layoffs of 90 days or more, but the 1 1/8-mile distance might be a hair short for Magic Attitude. I think she will be at her best racing 1 1/4 miles or farther this season, and I am excited to see what she can accomplish between now and the Breeders’ Cup.

The Sham (G3) runner-up will join stablemate Life Is Good in the San Felipe, where a top-two finish is well within reach. Medina Spirit ran a fantastic race in the Robert B. Lewis (G3) last month, carving out a fast pace over a slow track before tenaciously stemming off two late runners to prevail by a neck. Medina Spirit had every excuse to quit, but instead he held on gamely. Drawing post three in a race with a couple of obvious pace players should allow Medina Spirit to enjoy a more relaxed journey in the San Felipe.

A wide trip and a modest pace could not stop Ride a Comet from rallying to victory in the Tropical Turf (G3) at Gulfstream Park, his fourth consecutive. The Mark Casse trainee has been in sensational form since returning from a two-year layoff and possesses a wicked turn-of-foot, stamping him as a major threat to win Saturday’s ninth race at Santa Anita, the $400,000 Frank E. Kilroe Mile (G1, post time 7:26 p.m. EST).

War Stopper might not be the most accomplished horse entered in Saturday’s fifth race at Tampa Bay Downs, the $100,000 Challenger (G3, post time 2:18 p.m. EST). But he is certainly in hot form for trainer Todd Pletcher, entering off back-to-back allowance wins at Gulfstream Park. A versatile 4-year-old capable of winning with multiple running styles, War Stopper overcame a slow start and a big early move to record his most recent victory and will be tough to catch if he breaks alertly at Tampa.