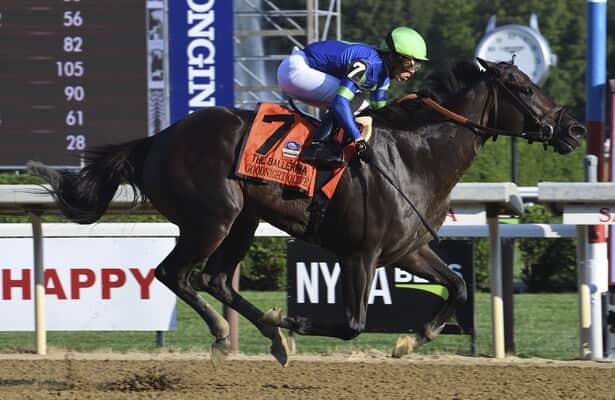 Is Goodnight Olive the new favorite for the Breeders’ Cup Filly & Mare Sprint? The 4-year-old filly certainly looked the part in the seven-furlong Ballerina Handicap (G1) at Saratoga.

Fresh off four straight victories against maiden and allowance competition, Goodnight Olive ran powerfully in her stakes debut, tracking fractions of 22.09 and 44.50 seconds before pouncing to a daylight lead. She finished strongly down the homestretch to beat a deep field (including defending Breeders’ Cup Filly & Mare Sprint winner Ce Ce) by 2 3/4 lengths in 1:21.40 seconds.

Goodnight Olive broke her maiden at Keeneland last fall, a good sign since the 2022 Breeders’ Cup is taking place at Keeneland. She could certainly wind up in the winner’s circle come November.

We’re turning back the clock a few weeks to belatedly add Pink Hue to our watch list. The daughter of Breeders’ Cup Juvenile Turf winner Mendelssohn impressed in a 1 1/16-mile turf maiden special weight on Aug. 7 at Saratoga, finishing strongly from midfield to score by 2 3/4 lengths in 1:42.51 seconds.

Trained by Chad Brown, Pink Hue was full of run down the homestretch, sprinting the final sixteenth of a mile in a rapid 5.73 seconds. Don’t be surprised if Pink Hue winds up contesting the Breeders’ Cup Juvenile Fillies Turf.

The beautifully bred Verifying delivered a sharp performance in his debut on Saturday at Saratoga, leading all the way to win a six-furlong maiden special weight by 1 3/4 lengths.

Verifying ran quickly from start to finish, clocking fractions of 22.90 and 46.04 seconds before finishing strongly (final two furlongs in 11.81 and 12.41 seconds) to stop the timer in 1:10.26 seconds. But even more exciting than Verifying’s performance is his pedigree; he’s a son of Triple Crown winner Justify out of Diva Delite, previously the dam of champion and 13-time graded stakes winner Midnight Bisou.

A big day for JUSTIFY continues as Verifying, a half brother to Midnight Bisou, breaks his maiden on debut at the Spa ?? for @bradcoxracing & the Coolmore Partners. #CoolmoreSires #HomeOfChampions pic.twitter.com/5RDoF0ABlV

Verifying is bred to run long and improve with maturity, so this Brad Cox trainee might be something special.

Cutting back from one mile to seven furlongs and stepping up into Grade 1 company didn’t stop the red-hot Cody’s Wish from winning his third straight stakes in the Forego (G1) at Saratoga. A determined outside rally from seventh place carried Cody’s Wish to victory by 1 1/4 lengths over champion Jackie’s Warrior, stopping the clock for seven furlongs in a rapid 1:20.95 seconds. The Breeders’ Cup Dirt Mile is shaping up as a logical goal for Cody’s Wish, who just keeps getting better.

Nearly four months after faltering to sixth place in the Derby City Distaff (G1), Edgeway bounced back with a determined victory in the Rancho Bernardo Handicap (G3) at Del Mar. Advancing on the outside into the teeth of solid fractions (22.05 and 44.85 seconds), Edgeway found just enough down the lane to beat Slammed by half a length. Edgeway stopped the timer in 1:15.97 seconds for 6 1/2 furlongs and appears back on track for the Breeders’ Cup Filly & Mare Sprint, a race in which she ran second in 2021.

Picked up his first Grade 1 win and seized leadership of the 3-year-old division with a powerful 5 1/4-length victory in the Travers (G1) at Saratoga. After patiently saving ground behind the early leaders, Epicenter shifted outside and unleashed an eye-catching move to take command and trounce a deep field in 2:00.72 seconds, the fourth-fastest time ever recorded in a 1 1/4-mile Travers. Watch out, older horses, because Epicenter is developing into a serious Breeders’ Cup Classic threat.

Bounced back from his defeat in the 1 1/8-mile Haskell (G1) to win the H. Allen Jerkens Memorial (G1) at Saratoga in comfortable fashion. The Chad Brown trainee tracked splits of 22.18 and 44.53 seconds before seizing command and holding off a challenge from Grade 1 winner Gunite to score by 1 1/4 lengths in a snappy 1:21.15 seconds. Jack Christopher is now 5-for-5 racing one mile or less and could be a good fit for either the Breeders’ Cup Sprint or Breeders’ Cup Dirt Mile.

It’s safe to say Laurel River loves Del Mar. The Bob Baffert trainee picked up his third straight victory over the seaside oval when trouncing a deep field in the seven-furlong Pat O’Brien (G2). Laurel River was content to track fast early fractions of 22.41 and 44.74 seconds before taking over and pulling away to win by 3 3/4 lengths in 1:21.37 seconds, earning a “Win and You’re In” berth to the Breeders’ Cup Dirt Mile.

Talented 2-year-old brought his record to a perfect 2-for-2 with a blowout victory in the Sapling at Monmouth Park. A half-brother to Grade 1 winners Nest and Idol, Lost Ark settled midfield early in the one-mile heat, then rallied strongly down the homestretch to go from a head behind at the eighth pole to 7 1/2 lengths clear at the finish line, which he reached in 1:37.20 seconds. An eye-catching performance.

A perfectly timed rally carried Malathaat to victory in the Personal Ensign (G1) at Saratoga, the fourth top-level win of her career but her first of 2022. The stoutly bred daughter of Curlin put her stamina to good use, charging relentlessly from a behind a modest pace to run down Grade 1 winner Search Results and prevail by half a length in 1:48.30 seconds for 1 1/8 miles.

A two-time graded winner sprinting on dirt, Wit continued his transition into a turf miler with a sharp victory in the Better Talk Now at Saratoga. The odds-on favorite settled in third place behind a runaway winner before gradually advancing to seize the lead and score by 2 3/4 lengths in 1:36.87 seconds.

Exceeded expectations as the 15-1 longest shot on the board in the Ballerina Handicap, rallying gamely from fifth place to finish second by 2 3/4 lengths against Goodnight Olive. Caramel Swirl could be a viable contender for the Breeders’ Cup Filly & Mare Sprint at Keeneland this fall, considering she scored her signature victory in Keeneland’s Raven Run (G2) last year.

Carved out a fast pace in the H. Allen Jerkens Memorial before fading to finish fourth behind Jack Christopher. A drop in class might be all this speedy sophomore needs to rebound.

Suffered a shocking defeat as the 15-100 favorite in the Forego, carving out fractions of 22.75 seconds, 45.10 seconds and 1:08.76 before weakening in the final furlong to finish second behind Cody’s Wish. But the final time of 1:20.95 seconds was quick, and Jackie’s Warrior ran well even in defeat, so he remains a key player for the Breeders’ Cup Sprint.

Ran into traffic trouble while rallying from off the pace in the Ballerina, but recovered to close meaningful ground and finish third by 4 1/4 lengths. A respectable performance from a talented and consistent Breeders’ Cup Filly & Mare Sprint contender.

Cut back from 1 1/8 miles to seven furlongs for the Forego and ran an admirable race, dueling with Jackie’s Warrior for early supremacy before weakening to finish third, beaten only 3 1/2 lengths for victory and 2 1/4 lengths by Jackie’s Warrior. Having cracked the trifecta in a couple of quality graded stakes this season, Pipeline has proven his worth against good company and should eventually nab a stakes win of his own.

Put up a gallant fight against two champions in the Personal Ensign. Search Results tracked Letruska for the first six furlongs, took over at the top of the stretch, and only succumbed in the final sixteenth of a mile to the charge of Malathaat. Search Results finished second by just half a length and clearly ranks among the best of a deep division.

A five-time stakes winner in New Mexico, Slammed ran too good to lose in her graded debut, finishing second by half a length against Edgeway in the Rancho Bernardo Handicap. Considering Slammed stumbled at the start before racing up to press an honest pace, her defeat can be viewed in a positive light.

Ran another fine race in the Travers, charging from off the pace to finish third while beaten only a nose for the runner-up spot. Zandon consistently runs well against tough competition and should have every chance to win another graded stakes before the year is over.

Last year’s Champion Two-Year-Old Male at the Eclipse Awards is retiring to stud after suffering an injury when finishing last in the Amsterdam (G2) at Saratoga, his lone run of 2022.

Gave way to finish last in the Travers and was essentially eased down the homestretch. This marked Early Voting’s second straight last-place finish since winning the Preakness, and while it’s possible he simply holds a great disdain for Saratoga (where both of his defeats were suffered), I’ll want to see Early Voting bounce back before supporting him again.

Faltered as the heavy favorite in the Pat O’Brien, finishing fourth after setting the early pace. After three straight defeats, I’ll drop Speaker’s Corner for the time being.