Horses to Watch: 11 to follow as Del Mar, Saratoga continue 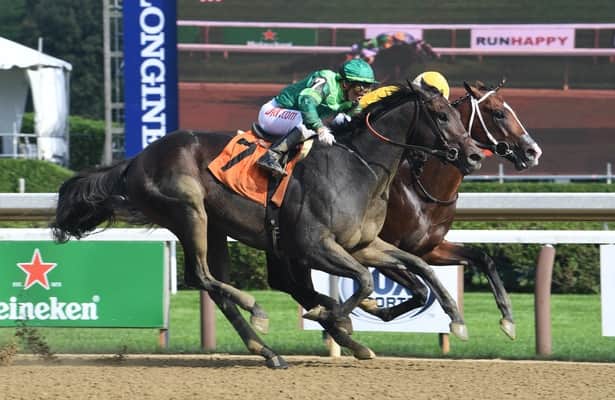 Could Beau Liam be a star sprinter on the rise for trainer Steve Asmussen? After dominating his debut at Churchill Downs by 7 1/2 lengths, the son of Liam’s Map fired off another powerful performance in a seven-furlong allowance on Saturday at Saratoga.

Dashing to the front through fractions of :22.79, :45.93, and 1:10.56 over a good track, Beau Liam was challenged by fellow blowout debut winner Witsel down the lane but refused to yield. The pair pulled six lengths clear of their closest pursuers, with Beau Liam prevailing by a nose in the fast time of 1:22.90. Surely Beau Liam is bound for stakes company next time?

The 2020 San Vicente (G2) runner-up ran out of his skin in a one-mile allowance optional claiming race on Saturday at Del Mar. Showing dramatic improvement while adding blinkers for only his second route run, the son of Munning tracked an opening quarter mile in :21.94, took command through a half-mile in :45.21, roared to a seven-length lead through six furlongs in 1:09.95 and hit the wire 9 3/4 lengths clear in 1:36.18.

There’s no telling whether Ginobili will repeat the feat next time out. But if he does, watch out – we could be looking at a late-blooming star in the making.

Although Hockey Dad was beaten to fourth place in the Oceanside on opening day at Del Mar, the sophomore colt didn’t run a bad race by any means. Returning to turf after a couple of defeats on synthetic and dirt, the son of Nyquist dashed to the front through splits of :23.03, :46.95, and 1:11.57 before weakening slightly in the final furlong to finish just half a length behind the winner.

Hockey Dad had won his two previous starts on turf, so it seems safe to say he’s at his best on grass. He was the only speed horse to hang around for a superfecta finish in the Oceanside, so I believe his effort was better than it appears at first glance, and I’m optimistic he’ll outrun his odds next time.

2YO PORTFOLIO COMPANY holds off the field with @iradortiz to break his maiden for @TheRealChadCBr1 in the 6th at #Saratoga pic.twitter.com/eReAQ98ajO

Portfolio Company completed the 1 1/16-mile turf test in 1:45.57, stamping his credentials as an early contender for the Breeders’ Cup Juvenile Turf (G1). The son of Kitten’s Joy is a full sibling to stakes winners Queen’splatekitten and Charming Kitten (the latter a two-time winner racing two miles), so Portfolio Company has the pedigree to improve with maturity. I’m excited to see what he can accomplishment in the long term.

He ran a winning race against Beau Liam at Saratoga, only to come up a nose short in his first start since December. The Chad Brown-trained son of Nyquist looks almost as promising as the winner and will have every chance to enjoy a strong summer/fall campaign.

Cutting back to 1 1/16 miles made a difference for Express Train in the San Diego Handicap (G2) at Del Mar. Exiting a third-place finish in the Hollywood Gold Cup (G1), Express Train pressed fractions of :22.97, :47.16, and 1:12.23 while racing in second place, then took command and dug deep down the lane to beat long shot Tripoli and Hollywood Gold Cup runner-up Royal Ship by half a length.

Express Train reached the finish line in a snappy 1:43.37 to record his second graded stakes win. I’ll be curious to see whether he cuts back even further sometime this summer or fall – I think the son of Union Rags can be equally effective sprinting seven furlongs.

A reasonably fair pace made all the difference for Great Island in the Matchmaker (G3) at Monmouth Park. Coming off a compromised third-place effort in a slow-paced renewal of the Gallorette (G3), Great Island encountered stiffer fractions in the Matchmaker, rating about half a dozen lengths off the pace through splits of :25.07, :49.56, and 1:12.86. She had 4 1/2 lengths to gain through the final eighth of a mile but unleashed a powerful finish to do exactly that, getting up to win the 1 1/8-mile turf test by half a length in 1:48.89.

A daughter of Scat Daddy conditioned by top turf trainer Chad Brown, Great Island might still have upside and looks like an intriguing middle-distance grass performer for the summer and fall.

Following Sea failed to stay 1 1/8 miles in the Haskell (G1) at Monmouth Park, but we can’t really knock his effort, considering he dueled for the lead through solid splits of :23.82, :47.32, and 1:10.64 while pursued by a trio of Triple Crown veterans. Although he was third across the finish line (and officially named runner-up via disqualification), Following Sea’s future is likely as a sprinter, with the H. Allen Jerkens (G1) at Saratoga looming as a viable target.

Hot Rod Charlie certainly ran a winning race in the Haskell – in fact, he was the first horse across the finish line, overcoming a wide journey to edge the ground-saving Mandaloun by a nose. Hot Rod Charlie was disqualified for drifting in and causing Midnight Bourbon to unseat his jockey, but we’ll still view Hot Rod Charlie’s performance in a positive light. The son of Oxbow clearly bounced out of his massive Belmont (G1) runner-up effort in good form and appears poised for a strong summer/fall campaign.

Two-time sprint winner suffered his first defeat when stretching out over a 1 1/2-turn mile at Ellis Park, finishing second by 4 1/4 lengths. But Irish Unity was facing older rivals and had every reason to tire after dueling for the lead through testing fractions of :23.06, :45.53, and 1:09.22, so we won’t judge his effort too harshly. As a half-brother to a quartet of two-turn graded stakes winners, Irish Unity still has potential to improve when stretching out over even longer trips, particularly if he catches a more relaxed pace.

The wait is over. The delicate but definitely talented Forza Di Oro will return to action in Wednesday’s ninth race at Saratoga, a 1 1/8-mile allowance (post time 5:39 p.m. EDT).

The field is salty, with stakes winners Highest Honors, Core Beliefs and American Dubai among the entries. But Forza Di Oro is no slouch himself; the Bill Mott trainee went 2-for-2 in 2020, narrowly winning a Belmont allowance before romping by 3 3/4 lengths against a quality field in the Discovery (G3) at Aqueduct. I expect the 4-year-old son of Speightstown to produce a competitive effort even off the 7 1/2-month layoff.

Suffered her second straight defeat when finishing fourth in the Diana (G1) at Saratoga, beaten 2 3/4 lengths while weakening down the homestretch. At this point, the daughter of American Pharoah appears to be just a cut below Grade 1 caliber, so I’ll take a wait-and-see approach before returning her to my watch list.

Failed to fire in the Diana, finishing last of eight while making her second U.S. start. The 4-year-old filly previously had finished second behind Harvey’s Lil Goil in the Beaugay (G3), so we’ll drop them both for the time being and wait to see how they fare later in the summer.

Followed up a seventh-place finish in the New York Stakes (G2) with a non-threatening sixth in the Diana, beaten 4 3/4 lengths. After two straight sub-par performances, I’ll wait until Magic Attitude bounces back before giving her another try.

Belmont Park maiden hero faltered in his first start against winners, finishing third in a seven-furlong allowance sprint on Saturday at Saratoga. Mahaamel came home six lengths behind the victorious Beau Liam and will need a better effort next time. Here is my complete, updated list of Horses to Watch.