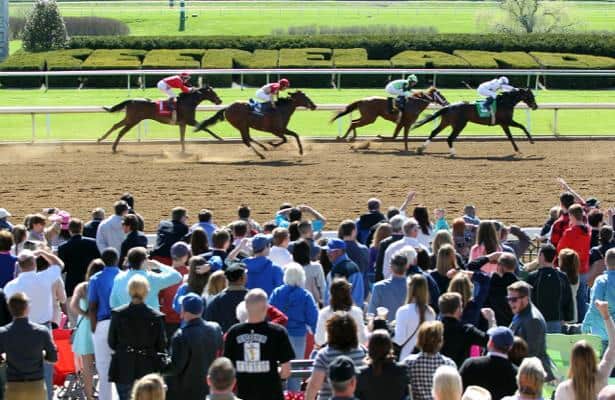 Get everything you need for the Breeders' Cup

Love Reigns. Trainer Wesley Ward has won the last three editions of the Turf Sprint and might nab another with Love Reigns. The Bolton Landing winner crushed her debut at Keeneland and is 2-for-2 competing in the U.S. She has speed but is tractable, opening the door for a strong effort in this speed-laden sprint.

Speed Boat Beach. The first four editions of the Turf Sprint have been won in gate-to-wire fashion, which bodes well for the chances of Speed Boat Beach. The undefeated Bob Baffert trainee might be the “speed of the speed” after wiring his debut with splits of 21.34 and 44.17 seconds, after which he nabbed the Speakeasy by pressing fractions of 21.06 and 43.36 seconds.

Delight. Rapidly improving Jonathan Thomas trainee wired the Jessamine (G2) at Keeneland by five lengths and isn’t facing a crazy amount of speed in Friday’s field, setting the stage for another favorable trip on the front end. Speed tends to perform well in the Juvenile Fillies Turf, and considering the way Delight has improved by leaps and bounds since her debut, it’s possible we haven’t seen her best yet.

Cave Rock. It’s going to take a big effort for anyone to upset Cave Rock in the Breeders’ Cup Juvenile. The son of Arrogate is unbeaten and unchallenged in three starts, including blowout 5 1/4-length victories in the Del Mar Futurity (G1) and American Pharoah (G1). Cave Rock has never been headed and enters off a pair of fast six-furlong workouts at Santa Anita, setting the stage for another flashy victory.

Lost Ark. A runaway winner of his first two starts, including the Sapling over next-out graded-stakes winner and Breeders’ Cup contender Major Dude, Lost Ark ran into traffic trouble when finishing sixth in the Breeders’ Futurity (G1). With a clean run in his second start at Keeneland, Lost Ark can bounce back with a stronger performance at enticing odds.

National Treasure. National Treasure wasn’t a match for Cave Rock in the American Pharoah, but he came as close as anyone else to beating the Juvenile favorite, finishing second by 5 1/4 lengths. Even in defeat, the son of Quality Road earned a flashy 101 Brisnet Speed rating, suggesting National Treasure is a serious exacta threat while regaining the blinkers he wore in his debut victory.

Verifying. I’m not convinced Verifying raced over the best part of a sloppy track in the Champagne (G1), which makes his gallant runner-up finish all the more impressive. Verifying led with a furlong remaining and was beaten by a deep-closing, wide-rallying rival. He’s bred to thrive stretching out around two turns and warrants serious respect for the hot jockey/trainer duo of Joel Rosario and Brad Cox.

I’m Very Busy. A yielding turf course and a pedestrian pace did I’m Very Busy no favors in the Pilgrim (G2), but the stretch-running colt nevertheless rallied to challenge in mid-stretch before flattening out slightly to finish second by one length. Assuming I’m Very Busy encounters a firm turf course and a faster pace at Keeneland, the Chad Brown trainee can step forward with a strong performance.

Silver Knott. Trainer Charlie Appleby has secured three wins from four starters in the Juvenile Turf, and his representative in 2022 is Silver Knott. Winner of the Solario (G3) over a tight-turning course at Sandown Park, Silver Knott prepped for the Breeders’ Cup with a determined victory in the Autumn (G3) and looks ready to vie for victory under five-time Breeders’ Cup-winning jockey William Buick.

Tres Soles. As a son of 2018 Triple Crown winner Justify out of a mare by three-time leading North American sire Tapit, Tres Soles is bred to improve with maturity and thrive running long. But he nevertheless managed to win his Sept. 29 debut sprinting six furlongs as a juvenile at Churchill Downs, suggesting the Steve Asmussen trainee has a bright future. We’ll see if he can win again while stretching out over seven furlongs in Friday’s fourth race at Keeneland, a $100,000 allowance optional claimer (post time 1:40 p.m. EDT).