Horsemen’s exec: Brace yourself, fed regulation is all but here 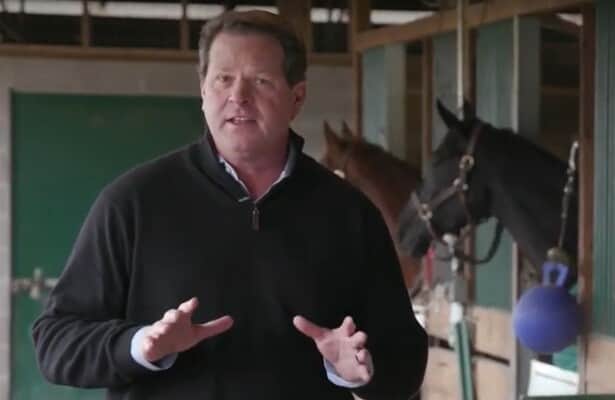 Even with court fights and a visit to Congress and the influential opposition of important horsemen, there may be no stopping the federal government from gaining regulatory control over racing in exactly five weeks.

Eric Hamelback said he accepts that. Not that the CEO of the National Horsemen’s Benevolent and Protective Association will go down without a fight. Or at least a civil conversation or two.

“I tell my members that currently, the Horseracing Integrity and Safety Act is law, so we have to abide by it.”

That was the thrust of Hamelback’s message Wednesday in an interview at his Kentucky Horse Park office for Horse Racing Nation’s Ron Flatter Racing Pod.

Even though the HISA concept has been widely supported by big racetrack owners like Churchill Downs and 1/ST Racing and organizations like the Breeders’ Cup, Hamelback has been the most audible voice of dissent, ostensibly speaking on behalf of state racing authorities and HBPAs who are none too happy with how the new regulations have been rushed toward their July 1 reality.

“It’s my job to make sure that we try to assist our members and do what we can to get this transition done,” he said, “until we’re told we don’t need to or, in my opinion, the bill is proven to be unconstitutional.”

Of course it all comes back to money, but that is a breezy characterization of the objections Hamelback has to HISA, which was passed in the waning days of the Trump administration. It was one of hundreds of amendments attached to the federal COVID relief bill before the 116th Congress went away in January 2021.

“We feel as if it would behoove everybody in the industry, including the (HISA) authority and (its) committees, to consider a delay of at least six months so that we can implement everything together,” said Hamelback, who visited Washington in April to try and convince members of Congress to approve taking a deep breath until Jan. 1. “Right now I’m going to say it’s a long shot.”

So, too, might be a judge’s ruling that could keep the administrative and track-safety components of HISA from taking effect this summer. Two cases are grinding their way through the courts – one in Kentucky and one that has moved from Texas to Louisiana. Even though his organization is the name plaintiff in the second case, Hamelback said he did not know if there would be a ruling that would slam the brakes at the 11th hour.

“There is nothing on the horizon that anybody is aware of,” he said. “I don’t know anybody that can find out an answer that that’s going to be different. So we’re sitting, and we’re waiting.”

The court cases were built on claims that HISA was unconstitutional. The case in Kentucky was brought on the basis of the 10th Amendment that guarantees states rights. Racing authorities led by Oklahoma objected to being billed for the costs of HISA without having any say-so.

The one that is in Louisiana was led by Hamelback’s group. It said HISA violated Article 1 of the Constitution, which prevents Congress from handing off its regulatory authority to private agencies. The argument was rejected by a federal judge in Texas before the NHBPA appealed it to a circuit court in New Orleans.

There the NHBPA and its allies were emboldened this month by a seemingly unrelated, securities-fraud case. The court in Louisiana ruled that the Securities and Exchange Commission itself was in violation of Article 1, sending a shockwave through the financial community.

Hamelback said if the workings of a federal agency like the SEC could be unconstitutional, where did that leave the Federal Trade Commission, which has been charged with looking after HISA?

“I would say that is a favorable parallel to what our lawsuit is challenging,” he said. “The fact is that they overturned something that is very similar.”

“Right now, come July 1, the rules are changing,” he said.

To try and make the best of it, Hamelback said he is hopeful that HISA CEO Lisa Lazarus would be open to conversations and negotiation to make the new law more palatable to horsemen and state racing authorities.

“Hopefully, at least under Ms. Lazarus, the door is open for us to make direct comments to the authority, at least to her, if we have an issue,” Hamelback said. “I would even say that door was opened by one of their attorneys, John Roach. They’ll listen, to the best of their ability, and have been at least in the last several weeks.”

Some facets of HISA have been pushed back to Aug. 1, namely rules regarding new horseshoes and jockeys’ crops that are in short supply. The more important postponement, however, was the effective date for drug rules. They will not take effect until Jan. 1.

One of the biggest concerns for Hamelback and, for that matter, nearly everyone involved in HISA is how much it will cost to enforce the medication regulations. After the authority failed twice to cut a deal with the U.S. Anti-Drug Agency, plan B became Drug Free Sport. The testing company based in Kansas City won the contract to be the watchdog looking out for racing’s suspected cheaters.

“What is that going to look like?” Hamelback asked. “That is going to be an interesting next few weeks.”

Drug Free Sport has had the NFL, NBA and NCAA as clients, but it has no experience working with animals. Based on the number of documented drug tests already carried out by state racing authorities, the company also will be called on to do about 75 percent more testing in a given year than it ever has done with humans.

In other words, will there be split samples? When and how could appeals come into play? Would there be a third party available to arbitrate disputes? And perhaps most telling, how much will all this cost?

That gets back to the issue that rubbed Hamelback the wrong way when HISA gained serious traction in the summer of 2020.

“We all knew that the funding was the big issue, period,” he said. “The anti-doping and medication control program is going to be delayed until at least the beginning of 2023. That has made it very difficult from a budgeting standpoint.”

Especially, Hamelback said, when the projected spending for the first six months of HISA – the six months without drug enforcement – may be just a drop in the proverbial bucket.

“When you look at the almost $14.4 million budget that we received and that the racetracks in most cases are getting invoiced for, I keep reminding them and all the commissioners this is only one part,” Hamelback said. “I feel confident it’s the less expensive part.”

Which begs the question who will end up paying to stamp out the drug cheaters? Hamelback is worried that it could come out of horsemen’s pockets in the form of reduced purses for races.

Ultimately, horseplayers have to be concerned that since they are the last line of budgetary defense for the survival of racetracks, they might wind up footing the bill for the implementation of HISA through higher takeout.

Hamelback said he would fight that, pointing out there are other entities who could be called on to absorb the added costs. Others have mentioned the idea of charging racetracks, breeders and sales operators more money, but even those costs could trickle down to the betting window.

“At the end of the day, I think there’s going to be and should be a fear for any of us,” Hamelback said. “Whether it be the horseplayer, the owner and/or trainer and/or (advance-deposit wagering) provider. All of these entities are going to have to see something. We as an industry from a professional side understand the horseplayers are not something we want to pressure with this.”

In spite of his opposition to the way HISA was written and rolled out, Hamelback said he is in favor of tightening regulations to advance track safety and to crack down on drug violations.

“One of the things I have advocated for quite a long time is national uniformity with a little bit different spin,” he said. “I have continued to say that the problems in our industry really revolve around the lack of uniformity in the laboratories.”

Hamelback would like to see the U.S. Department of Agriculture and its 44-year-old National Veterinary Services Laboratory get more involved. He also said if the catalyst for HISA was the surge in horses dying at Santa Anita three years ago, then track safety needs as much attention as medication policies.

“We need more research,” he said. “That’s funding, right? That doesn’t necessarily mean we have to have a federal act.”