Horsemen: Arlington Park closure would be ‘a step too far’ 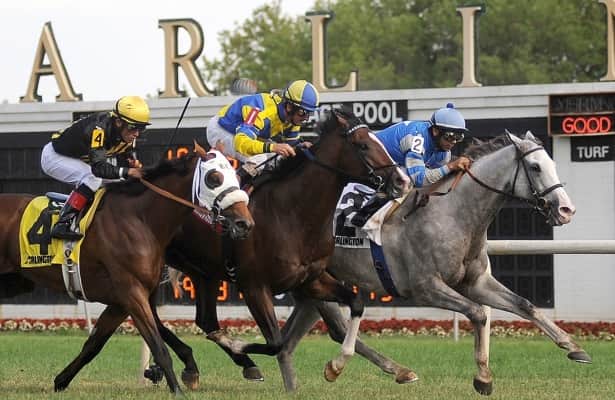 With the announcement by Churchill Downs Inc. that it will attempt to sell the land on which Arlington Park stands, time appears short for the grand track in the northwest suburbs of Chicago.

The announcement, coupled with CDI CEO Bill Carstanjen’s comment in July that the land could have a “higher and better purpose,” has stirred ill feelings among many in the Illinois racing community.

Mike Campbell, president of the Illinois Thoroughbred Horsemen's Association was among those who decried the decision.

“What higher and better use could there be for that property than in part to save it for racing?” Campbell said.

Campbell said the move, though not unexpected, shows a lack of commitment to both racing and the state by CDI.

“It’s amazing, the lack of emotion, responsibility to racing that they would just close a facility like that,” Campbell said. “It would be different had they offered it, even for racing (and) say there was a moratorium that existed (and that) no gaming could take place there. It was never offered. There’s many buyers for Arlington Park and maybe even some for just a racing facility.”

Campbell said there was no public process regarding selling the track and that horsemen were never consulted about impending changes.

Rivelli, a third-generation horseman who considers the track to be “home,” acknowledged that acquiring Arlington could be unlikely. But he said the group will still try.

“If it’s a publicly traded company, and (the property) is worth $100 million in development, and we’re willing to give them $150 million for it, at least it’s going to be presented to the board,” Rivelli said. “They’re going to have to decide whether they want to tell their shareholders they turned down ‘X’ amount of money.”

For Rivelli, the quest to save Arlington is a personal one, as he has been around the track since his early childhood.

“It’s just home,” Rivelli said. “Every year we look forward to coming and racing and parents and buddies and friends.”

When asked if a sale to a group looking to continue racing would be considered, CDI spokeswoman Tonya Abeln said in an email that the property is being marketed as “land for future development.” She also said the last 30 years at the track have “been nothing but a steep and precipitous decline for on-track betting.”

When CDI announced the property was for sale Tuesday, the press release said it will attempt to relocate Arlington’s racing license to another venue either in Chicagoland or somewhere else in the state. However, in Illinois, racing licenses are given to the venue and attached to the address and are not able to be moved.

Track president and CDI vice president Tony Petrillo confirmed that any license for a new track would have to be completely new.

“You would petition the Illinois Racing Board for a number of race dates and complete your application that requires you to submit a number of documents and evidentiary support of the racetrack facilities,” Petrillo said. “You have to immediately go before the Illinois Racing Board before you could be issued a license or be considered for a license.”

Any new owner who wished to keep Arlington operating would also need to apply for a new license.

As it currently stands the track will open April 30 for what will likely be its final meet. Stall applications for that meet, which will run through Sept. 25, are due March 12, according to Petrillo.

Meanwhile, Campbell said he is unwilling to let the venue, which has been operating since 1927, go away without a battle.

“I’m asking fans across America, weigh in on this,” Campbell said. “Corporate America just can’t get away with everything. This is a step too far, in my opinion.”