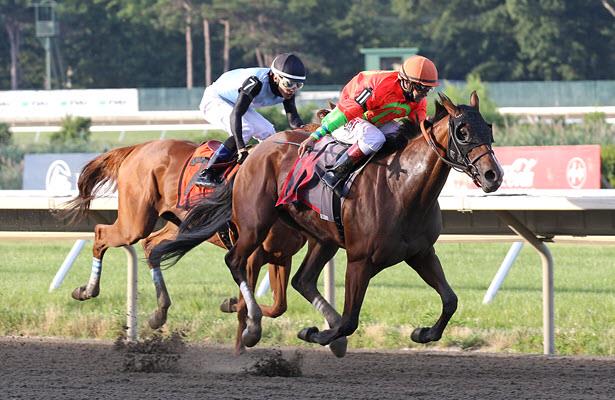 New Jersey-bred Horologist loves the Garden State. Back at Monmouth Park--where she was a three-time winner last summer--Horologist improved to 5-for-5 overall on the Jersey Shore main track when running down longshot front-runner Our Super Freak in the stretch to win the $250,000 Molly Pitcher Stakes (G3) at Monmouth Park on Saturday.

Horologist was making her first start for Hall of Fame trainer Bill Mott after spending the first half of this season with Richard Baltas. She capped off a big day for Mott, who about 30 minutes earlier won the $350,000 Coaching Club American Oaks (G1) with Paris Lights at Saratoga.

Ridden by Joe Bravo -- who also won the Grade 1 United Nations earlier on the card with Aquaphobia -- Horologist stalked fractions of :23.64 and :47.09 for the opening half mile set by dueling longshots Our Super Freak and Winning Color in the 1 1/16 miles Molly Pitcher. Horologist took aim at the leaders at the three-eighths pole and after six furlongs in 1:11.32, drew on even terms with Our Super Freak at the top of the stretch.

While Our Super Freak continued on gamely, Horologist edged in front of that rival late and pulled clear to win by about two lengths in a final time of 1:43.84. Our Super Freak was followed across the wire by 3-2 favorite Royal Flag and Sweet Sami D.

Horologist, who is owned by Cameron Beatty's There's a Chance Parkland Thoroughbreds, paid $9.40 as the 7-2 fourth choice in the wagering. She's a Julie, who was exiting a win in the Grade 1 Ogden Phipps on June 13, was never a factor.

#11 Horologist (7/2) wins the Molly Pitcher to close out a phenomenal Saturday of racing at Monmouth Park pic.twitter.com/6vImdOLcfv

This is the second stakes win for Horologist, who last year won the Monmouth Oaks (G3) while with trainer John F. Mazza. Previously this season, the daughter of Gemologist was off the board in both the La Canada (G3) at Santa Anita and Apple Blossom (G1) at Oaklawn Park, second in the Nellie Morse at Laurel Park and most recently was eased in the May 31 Santa Maria (G2) at Santa Anita.

“Sometimes the horse goes to something new that they’re not familiar with. It’s all a risk, " Beatty said of the Santa Anita outing. "Me and my partners took the risk. We regrouped and we decided to bring her back to Monmouth Park. We knew she loved it here. She’s 5-for-5 here now. She just loves it here. I love it here. It’s unbelievable that she’s a multiple graded stakes winner now as Jersey-bred. Just a tremendous feeling of accomplishment.”