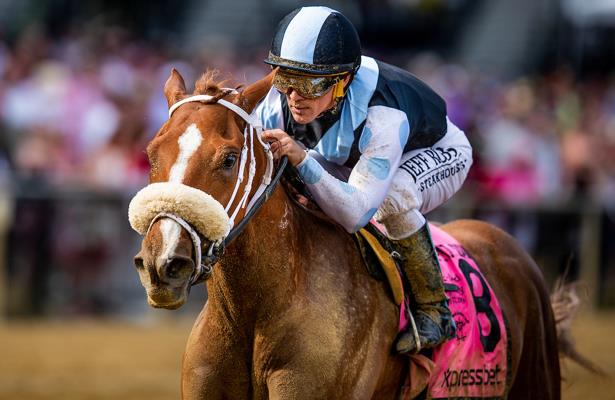 Midnight Bisou is back to defend her title in the Grade 1, 500,000 Personal Ensign Stakes at Saratoga on August 1. Steve Asmussen’s consistent, versatile mare remains in top form and is the overwhelming favorite. She will face five opponents in her repeat attempt, and Point of Honor is her most accomplished foe. The latter does her best running in the stretch and needs pace help, and there is a real chance that the fractions could be honest.

#3 Midnight Bisou (2-5) is going to be very difficult to beat at minuscule odds. She went 7-for-8 in 2019, and kicked off her 2020 campaign with a good 2nd in the Saudi Cup. She romped in the Fleur de Lis (G2) last time, and the stalking win type is probably faster and classier than these.

#6 Point of Honor (5-2) looks like the only one with the ability to give Midnight Bisou a run for her money. The consistent late running filly missed by a nose in the Ogden Phipps (G1) last time, and she landed the place in the Coaching Club American Oaks (G1) and Alabama (G1) at Saratoga last summer. She wants every bit of this mile and an eighth distance and owns the best overall late pace ratings. She is relatively lightly raced and, though it's been a while since she's won, there is still upside here.

#4 Vexatious (5-1) was clearly second best to Monomoy Girl in the Ruffian (G2) last time, and she earned a quality speed figure that day. The tactical mare is sharp and should work out a decent trip, and she missed by a neck in the restricted Summer Colony at this course and distance last summer. She can hit the board on her best day.

#1 Abounding Joy (20-1) stalked from the inside post and cruised to an easy win as the even money favorite in the Iowa Distaff July 4. The lightly raced five-year-old mare figures to save ground stalking the pace in her longest and toughest test to date.

#2 Motion Emotion (20-1) landed the place in her last three starts. She likes to be forwardly placed, but she appears best at 8.5 furlongs, and Midnight Bisou dusted her in the Fleur de Lis on June 27.

#5 Bossy Bride (50-1) might try to go to the front as the longest shot on the board. She might lead part of the way but seems completely outclassed. She exits an easy starter allowance win as the strong favorite in the slop, and that race was originally scheduled for turf.