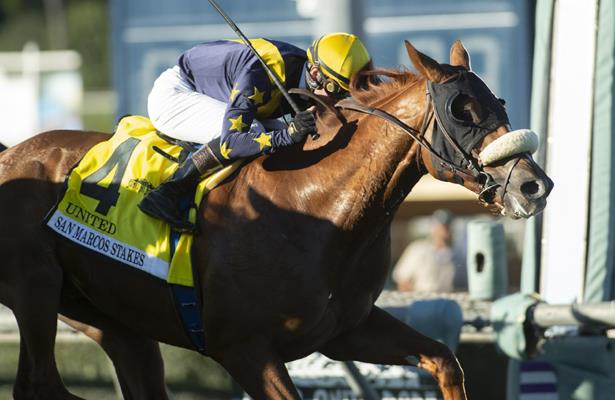 The Grade 2, $200,000 Charles Whittingham Stakes features a field of seven, and United is the strong morning line favorite Saturday at Santa Anita Park.

Richard Mandella’s colt shipped to Dubai for the $6 million Sheema Classic on March 28, but that card was canceled. Back on home turf, he can stalk or close, and will probably track what is expected to be a slow pace. Recent optional claiming winner Originaire and Chad Brown shipper Rockemperor appear to be his main rivals.

Before deciding how to bet the eighth race feature, let’s examine the field.

#5 United (6-5) stalked and scored as the favorite in the San Marcos (G2) at this course/distance on Feb. 1. He ran well in multiple graded turf routes before that, including a runner-up finish in this event last year. Flavien Prat rides him well and he is an obvious threat.

#7 Rockemperor (5-2) lacks speed, and that is his biggest obstacle in a race without much pace. Slow early/fast late turf races are frequently won by the horses with the best late run, and this one packs a decent stretch kick. This is the right distance for Chad Brown’s shipper, and Irad Ortiz Jr. takes the call.

#1 Desert Stone (8-1) enjoys this turf course and might like a mile and a quarter. He found his best stride late in his winning San Gabriel (G2) return at a mile and an eighth on Jan. 4. He can hit the board if he runs one of his better races.

#2 Multiplier (10-1) has not won in quite some time but does have some back class. He captured the Illinois Derby (G3) in 2017 and placed in multiple stakes over the years, including the 2018 Del Mar Handicap (G2) and 2020 Santa Anita Handicap (G1). He has plenty of stamina and can be used underneath.

#4 Synthesis (30-1) is another surface switcher with early-pressing speed. He failed to crack the top three in a pair of turf routes last year.

#6 Originaire (5-2) got plenty of pace help in his strong optional claiming turf win on Feb. 29. He faces better and won’t get that kind of setup in this spot.