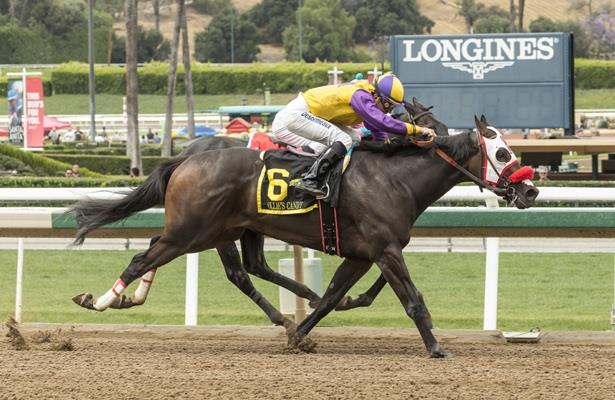 Trainer John Sadler has absolutely owned the Grade 1 Clement L. Hirsch Stakes at Del Mar since 2014. That year, he saddled winner Iotapa and followed that up with back-to-back victories with Stellar Wind in 2016 and 2017.

Last year, Ollie’s Candy got the job done for Sadler, and she is back to defend her title in 2020. Sadler trainee Healthy Addiction also won the Hirsch in 2006. Can Ollie’s Candy do it again? She is the second choice on the line in a competitive renewal of the Hirsch.

Before deciding how to bet Sunday’s 10th race at Del Mar, let’s go over the entire field.

#3 Hard Not to Love (2-1) always finishes in the top three, but I am still not convinced that she is a router. She finished second in both routes and is 5-for-6 around one turn. She owns competitive numbers and running style versatility.

#2 Ce Ce (3-1) might have crammed in one too many races after she lost as the favorite in the Santa Maria (G2). She started 2020 with a sharp sprint win, and she stretched out and was outstanding in the Beholder Mile (G1). She traveled to Oaklawn and was all heart in a gritty head victory over Ollie’s Candy in the Apple Blossom (G1), and returned to California and came up empty in a flat show finish in the aforementioned Santa Maria. She has been freshened for this and could easily return to top form.

#6 Fighting Mad (4-1) got loose early and kept on going in the Santa Maria. She easily went all the way in the local Torrey Pines (G3) last summer, and she might get brave if they leave her alone early.

#1 Hang a Star (15-1) stretches out in distance, and this sure is a tough spot to try a route of ground for the first time. Her best recent effort was a rallying runner-up finish in the Desert Stormer (G3).

#4 Dogtag (4-1) tries dirt for the first time since finishing 4th in her career debut at Saratoga in 2018, and she was placed 3rd through disqualification that day. Three of her four turf victories were in the stakes ranks including her last pair for Richard Mandella.

#5 Ollie’s Candy (5-2) regressed just like Ce Ce did in her start after the Apple Blossom. This one blew a clear lead and ended up 3rd in the Ogden Phipps (G1) last time. The consistent, versatile mare won this race last year and is a logical threat under Flavien Prat.