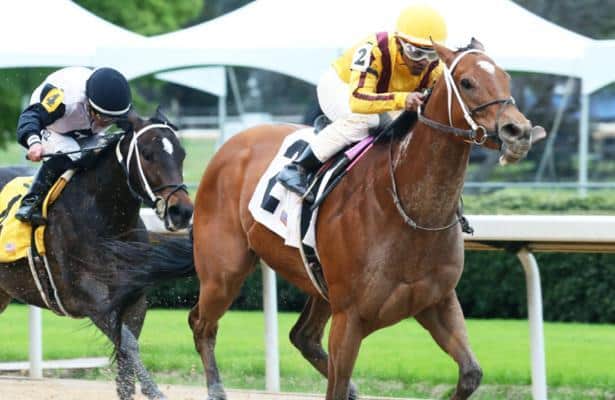 There are a pair of interesting graded stakes races carded Saturday at Churchill Downs, where the morning line favorites are solid contenders and live longshots make the exotic wagers an enticing proposition. Here's how I'm playing both events.

The key to this race is pace, and whether you think Break Even is vulnerable. She is probably going to be sent hard early under Joel Rosario sporting a 6-for-8 record on dirt, and six furlongs is a good distance for her. She is a solid threat if she shakes loose early, but she had everything her own way at Oaklawn Park on April 18, and that might not be the case in this heat. At 9-5 on the line, she might be worth trying to beat.

Spiced Perfection is a two-time Grade 1 winner, and she is 3-for-3 at six panels. Mark Casse has her now, and she can compete with these on her best day. But she figures to take more money than she should, and her recent speed figures are below her best.

Mia Mischief is the deserving favorite. She is a razor-sharp win type with running style versatility. She drew an advantageous outer post, likes this course and distance, and could easily score again for Ricardo Santana Jr. and Steve Asmussen.

There are a trio of longshot late runners worth considering underneath. Princess Causeway showed a big late kick in an optional claiming victory April 11 at Gulfstream Park. She is a quality late-running sprinter. Bell’s the One returns to dirt and is perfect at this distance. She rallied for the place in both local starts and should get pace to chase. Unique Factor is versatile and fairly consistent. She earned an improved number in a neck defeat at Oaklawn on May 1, and Peter Miller has her now.

There is not as much pace as you would expect on paper for a turf route with 14 entrants. Mitchell Road drew the far outside post and might be able to get to the front. She is versatile and consistent, and her new rider Joe Talamo figures to put her in the race from the outset. Bill Mott’s mare was faster last year, but at 10-1 she is worth a look.

Juliet Foxtrot is the favorite, and rightfully so. She had an excellent campaign in the graded turf route ranks last year. The classy, versatile mare should be right there throughout if she returns running for Brad Cox. She hooked the likes of Vasilika, Uni and Got Stormy in her final three starts of 2019 and made a good account of herself.

Beau Recall is also trained by Cox, and she does her best running in the late stages. She finished first or second in all seven starts since moving to this barn. The strong finisher needs pace help and probably won’t get it, but she was able to sit closer to the pace and remain effective in her last pair.

Nay Lady Nay improved throughout her sophomore campaign for Chad Brown. She figures to stalk below par fractions under Jose Ortiz, and another forward move is possible.

Secret Message scored as my top choice in the Nassau (G2) last year and appeared in some tough spots after that. This race does not seem to set up for Graham Motion’s mare, but she has the class and talent to compete here. Her stablemate Varenka went from maiden winner last May to a graded stakes winner at Saratoga over the summer. The slow early/fast late race shape might be to her liking. She closed nicely in multiple races like that in 2019.