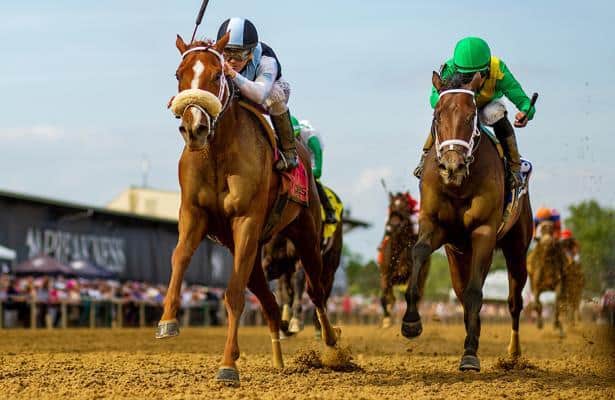 A rather small but select group of fillies and mares take center stage Saturday in the Grade 1, $300,000 Ogden Phipps Stakes at a mile and a sixteenth over Belmont Park's main track. There are no automatic eliminations in the six-horse field, with each of them graded stakes winners and morning line favorite Ollie’s Candy is probably the one to catch and beat.

Before deciding how to bet Saturday’s ninth race, let’s meet them all.

#5 Ollie’s Candy (8-5) was aggressively ridden by Joel Rosario in a head defeat in the Apple Blossom (G1) on April 20, and that was a grueling race for the top two finishers. Ce Ce won that battle and returned to lose as the heavy favorite in a graded route at Santa Anita Park on May 31. John Sadler’s consistent mare owns early-pressing versatility, and this appears to be her preferred distance. She is a solid contender but hardly a standout, and I am a bit concerned about a regression.

#2 Point of Honor (2-1) was miles behind early in the Apple Blossom, and she uncorked a sustained late run to finish a more than respectable third. She reconnects with winning rider Javier Castellano and should be finishing. I doubt she falls way behind early this time, and I believe she has a real shot to upend the favorite. I would almost think she was a slam dunk if this race was at a mile and an eighth or longer.

#1 Pink Sands (6-1) rallied to win her last two elongated sprints versus graded foes at Gulfstream Park. She is especially dangerous at seven panels and one mile at that venue. She is winless in five local races but did hit the board each time. Her recent form is excellent and she looks like a threat underneath.

#3 She’s a Julie (8-1) captured six of her first 13 starts but has now dropped five straight, and her stakes return at Churchill Downs on May 23 was her worst effort yet. I cannot endorse her in her current form, but this is her preferred distance and a better showing seems possible.

#4 Blamed (10-1) removed blinkers got back on the beam in a flat mile optional claiming affair at Oaklawn Park on April 30. She should be forwardly placed but faded badly in her last two graded attempts.

#6 Golden Award (7-2) was part of the exacta in eight of her last 10 starts, and she won five of those races including a pair of Grade 3 events. She will probably track the pace from the outside post, and she is the lone entrant with a win at Belmont Park.