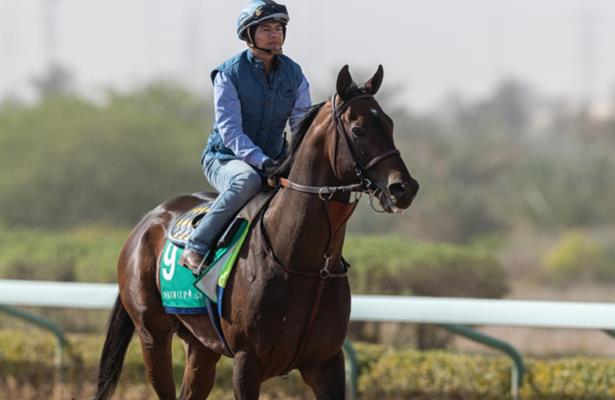 Big international racing events such as the Breeders’ Cup and Dubai World Cup day programs can be both challenging and rewarding. Saturday's Saudi Cup program is the newest handicapping puzzle on the block, with this another test of mixing overseas contenders with American runners.

What are the best ways to go about that? Here, I'll share a few thoughts and which resources I've found best for the task.

I like to use Brisnet past performances for the overseas runners. I have had much success over the years with their overseas class ratings in big international turf races.

The opening race on the Saudi Cup program, for example, is the Mohamed Yousuf Naghi Motors Cup at a mile and five-sixteenths on the turf course. #9 Deirdre (4-5) is the morning line favorite, and she is the class of the field. But #4 Mount Everest (5-1) is an interesting alternative to the favorite. His class ratings were steadily advancing from the summer of 2018 through the fall of 2019.

Mount Everest split a 12-horse field in the Breeders' Cup Turf (G1) before ending up 14th and last in the Hong Kong Vase (G1) last out. The time off has probably done his some good, and the 4-year-old colt might be ready for a breakthrough effort for Ryan Moore and Aidan O’Brien.

Another angle I like to use for foreign runners is field size. It is not uncommon for horses to compete in races with 20 contenders or more, and even an off-the-board finish still in the top half might be better than it appears.

#1 Cross Counter (9-5) fits that angle, and he is the deserving favorite in the Longines Handicap at a mile and seven-eighths on turf. He was a close-up eighth of 24 in the Melbourne Cup (G1) last time but was beaten just 1 1/4 lengths in one of the world's most prestigious races. He defeated 23 rivals in the 2018 Melbourne Cup and followed that up with a victory in the Dubai Gold Cup (G2) last March. Cross Counter looks tough to beat, and I will probably key him on top of a few live price players.

The sixth race on the card is the Saudi Derby at one mile on dirt, and #12 Final Song (5-1) has been competitive in some large fields, too. She finished third of 25 in a Group 2 race at Ascot last summer. She also defeated 14 rivals in Dubai on Jan. 2, and was second by a neck in a 14-horse field on Feb. 6.

Horses shipping from North America frequently rule the roost on dirt in the desert. It is tougher for our grass horses to win overseas turf races. Of course, there are exceptions to every rule, especially with trainer Wesley Ward, who has had success with his juveniles at Royal Ascot. The reason for that success is speed. His 2-year-olds are just quicker than the overseas turf sprinters. In longer grass events, the overseas runners are usually classier and have more stamina.

Speed is not the only positive angle for American runners. Some trainers seem to do better shipping to the desert. Steve Asmussen, Bob Baffert and Bill Mott all have experience shipping to Dubai, and they have a few wins between them. Peter Miller has brought some live runners to the desert in the past such as Stormy Liberal and Gray Magician.

The second race on the Saudi Cup card is the 1351 Cup at 5 1/2 furlongs on the turf course. The two U.S. runners are #2 Ghoul (20-1) and #7 Legends of War (15-1). The former has improved since moving to the Peter Miller barn and returning to turf. The latter is most effective when he gets involved early. He did just that in a front-running victory in a graded turf sprint at this distance at Kentucky Downs last summer.

In the aforementioned Saudi Derby, #3 Billy Batts (9-2) and #10 Rowdy Yates (8-1) are the American representatives. It has been all turf for Billy Batts so far. He was a consistent miler in 2019 and returned with a smart turf sprint score in the Baffle Stakes at Santa Anita on Feb. 7. He has the class and speed to succeed if he handles dirt. Rowdy Yates is 5-for-8 overall for Steve Asmussen, and he looked good winning the Riley Allison Derby in New Mexico Jan. 26. Miller’s Billy Batts seems the more interesting of the two.

The seventh race on the card is the Saudia Sprint at six furlongs on dirt. The first U. S. hopeful is #1 Captain Scotty (5-1). He adds blinkers after wiring the field in the Palos Verdes (G2) at Santa Anita on Jan. 25. That was a four-horse field, however, and he will have to run faster throughout to win this. #3 Gladiator King (4-1) used to compete in the U.S. but was sold to overseas interests and captured his first two starts in Dubai. He should be forwardly placed. #4 Imperial Hint (4-5) is the big name at very low odds. The 7-year-old owns early pressing versatility and has been a top-notch sprinter for multiple seasons. He shipped to Dubai last March and ended up third in the Golden Shaheen (G1). #10 New York Central (30-1) is another former American runner now conditioned by Saudi interests. This is his first international start and he does his best running in the stretch. Imperial Hint has a very good chance to notch a win for the U.S.

The final race on the program is the $20 million Saudi Cup at a mile and an eighth on dirt, and the U.S. is well represented (#7 Maximum Security, #8 McKinzie, #10 Mucho Gusto, #12 Tacitus and #14 Midnight Bisou). Maximum Security is the favorite, and this is his longest race since the Haskell Invitational (G1) last summer. He should be forwardly placed and might take more money than he should. Mucho Gusto exits a big win in the Pegasus World Cup (G1) at Gulfstream Park, but that was not a deep field. Tacitus has not won since the Wood Memorial (G2) last April. He is frequently in the mix in graded routes and might be able to hit the board. Midnight Bisou has a nose for the wire but is behind the top American male runners from a numbers standpoint. That leaves McKinzie, and I think he is the most likely winner of this race. Bob Baffert’s 5-year-old horse is classy and consistent. He runs well fresh and owns early-pressing versatility.