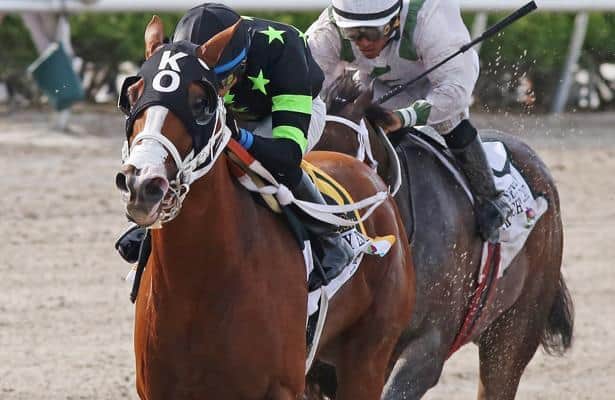 There are four graded races on the docket Saturday at Gulfstream Park, where the field sizes are good and the races competitive. Let’s see if we can scope out a few value win contenders.

Plenty of pace in the paper race with #2 Bronx Beauty, #3 A Bit of Both, #4 Lady’s Island, #5 Blazen Betsy, #8 Meadow Dance, and #9 Heavenhasmynikki. One of those runners might shake loose and score, but I am going with #6 Stormy Embrace (6-1) as my value top choice. The latter cuts back a furlong and should work out a decent stalking trip. The six-time local winner missed by a neck in this event last year.

This is another race with a decent amount of pace. The expected honest fractions might set the table for #6 Molto Bella (9-2). The tactical type exits a sharp optional claiming victory at six panels, and that was her first start in more than nine months. She should sit a decent trip and figures right there if she improves again. Can she run two alike? She has been up and down in her last four starts. She faces a solid group of older rivals in this spot.

At least five runners appear capable of winning this turf route. I cannot fault anyone for make a case for #3 Flavius, #5 Channel Cat, #7 Cross Border and #9 Marzo. I respect those runners, but once again landed on #8 Admission Office (9-2). This one has been on my radar screen since finishing second to Catholic Boy as my value top choice in the Dixie Stakes (G2) back on May 18. He rarely runs a bad race on turf, and should get some pace to chase. He shipped to Florida and fired a Palm Meadows bullet for this Dec. 7 ahead of what might be his first graded win.

Prince Lucky is the deserving favorite. He is 2-for-2 at Gulfstream, and both of those wins were easy graded victories at one mile. Second betting choice #6 Bodexpress controlled the pace and easily captured his last pair versus lesser at Gulfstream Park West. He is 0-for-4 locally with three runner-up finishes, and one of those was a second to Maximum Security in the Florida Derby. He probably won’t dictate terms this time. For my value pick, I went with #7 Phat Man (12-1). He moved to the J. Kent Sweezey barn and ran well in two of his last three starts. He was second to rock-solid runner Cordmaker at Delaware Park on Aug. 15, won a $75,000 stakes at Monmouth on Sept. 15 and finished a wide fifth behind buzzsaw Spun to Run at Parx on Oct. 12. He fired a Tampa Bay bullet Dec. 1, Irad Ortiz Jr. hops board, and this race might set up for him.