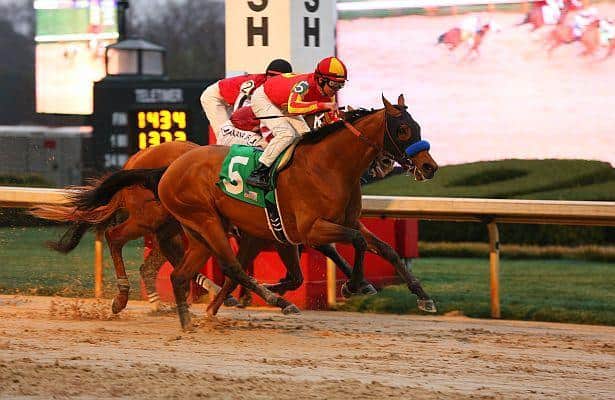 Idle since running second to California Chrome in the Grade I Santa Anita Derby April 5, heavily favored Hoppertunity flew from off the pace to finish a diminishing half length behind stable-mate Pimpernel in Wednesday’s $60,000, seven furlong allowance feature Thursday at Santa Anita. Trained by Bob Baffert and off at 6-1 in a field of nine 3-year-olds and up, Pimpernel, with Martin Garcia aboard, slugged it out on the front end with Chief Lion and got the distance in 1:22.06.

“He was pretty gutty today,” said Baffert. “He stayed down inside and fought it out.”

A winner of the Grade II Rebel Stakes at Oaklawn Park two starts back on March 15, Hoppertunity was next to last, 10 lengths off the lead going into the far turn and was in front of the winner two jumps past the wire. Off at 7-5, he paid $3.40 and $2.60.

“He just ran out of real estate,” said Baffert. “He ran a great race.”

Smith, who had ridden Hoppertunity in his last two starts, echoed Baffert’s sentiments.

“Other than winning, we couldn’t really ask for any more out of him today,” said Smith.“Nobody’s making up much ground today. We gotta be happy with this and he’ll get a lot out of it.”

Kate’s Event, ridden by Tyler Baze, finished another three lengths back in third and paid $4.00 to show.