'Hoping to see that spark' from Mendelssohn in Travers 2018 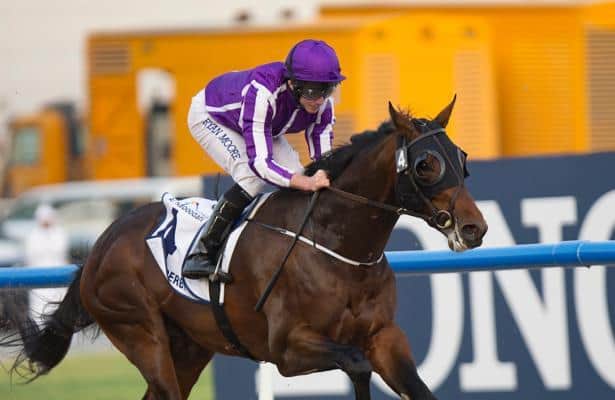 Trainer Aidan O'Brien's European contenders Mendelssohn and Seahenge on Thursday made their first venture to the Saratoga Race Course main track, galloping under their respective exercise riders toward starts on Travers Stakes day. The tandem arrived in Saratoga on Tuesday after making the approximately 12 ½-hour trip from Ireland.

On Saturday in the Grade 1 Travers Stakes, Mendelssohn will attempt to regain the brilliance he displayed when he won the Group 2 UAE Derby by 18 ½ lengths in March. The Travers, carded as the 11th race with a post time of 5:44 p.m., is a 1 ¼-mile event for 3-year-olds and will be broadcast live on NBC.

"They just did a gentle canter around from the seven, seven and a half [pole]," said T.J. Comerford, assistant to O'Brien. "They trotted the opposite way, and we brought them back and just washed them. Tomorrow, they'll pretty much do the same; a little bit quicker from the same [starting point] again."

In his two previous trips to the United States, Mendelssohn was last of 20 in the Grade 1 Kentucky Derby in May at Churchill Downs and third, beaten 9 ½ lengths, as the 3-2 favorite in the Grade 3 Dwyer on July 7 at Belmont Park.

"I think after his bad run in the Kentucky Derby, I suppose he has to build on it," said Comerford. "I think the last day at Belmont he did build on it. He had to get a little bit of confidence from somewhere to come back and run like he did. I know they made him favored and I suppose a lot of people expected him to win, but it was a steppingstone for the days ahead more than anything. I think running positive on the dirt was a big thing for him. He did that at Belmont, and if he can run a good race [in the Travers] that's all we'll be asking for."

Both colts are owned by Michael B. Tabor, Mrs. John Magnier, and Derrick Smith. Comerford admitted that it's difficult for O'Brien's Ballydoyle training operation, which is based in County Tipperary, Ireland, to get a horse fully prepared for the frenetic style of American dirt racing.

"We just train on our own premises at home, pretty much the same as we always do, so we can't really prepare much for [American dirt races]," said Comerford. "For the Kentucky Derby we went to Dundalk, and that was on the synthetic surface. That's as close as we can get. We have the American styles and we can jump them from the gate. We can do all of that, but in regards to running them on the dirt, we have to come here. So, really, our only preparation is to run in these races. The closest we can get to it is our all-weather tracks."

O'Brien has selected the Grade 1 Breeders' Cup Classic in November at Churchill Downs as his long-term objective for Mendelssohn who, like Triple Crown winner Justify, is a son of Scat Daddy.

"We have to try to get back to that form [Mendelssohn showed in the UAE Derby]," said Comerford. "That's why we're coming here. We're trying to persist with what the plan was originally, and that is to get him to the Breeders' Cup. We're just hoping to see that spark again because that was a good day and that was a really good performance. It's hard to imagine, 'Was that it?' I'm sure he can come back to that again. We just have to try."

Seahenge has accompanied Mendelssohn on his two previous trips to the United States, finishing seventh in the Grade 3 Pat Day Mile in May at Churchill and seventh in the Dwyer. Winner of the Group 2 Champagne in England as a 2-year-old, Seahenge will be switching back to grass and facing older horses for the first time Saturday in the Grade 1, $1 million Sword Dancer at 1 ½ miles on the inner turf course.

"I actually thought he came home well and finished well [in the Pat Day]," said Comerford. "I thought it was a positive run from him, if you could build on that. When he ran at Belmont he didn't run to that grade again. We're coming here to trying to win a turf race as well. The turf is not a problem for us. That's what we really dabble in."

Although the Sword Dancer looks like a tough assignment for Seahenge, who was tabbed at 30-1 on the morning line, Comerford said there were several reasons why the race was a logical selection.

"We have plenty of horses for turf races at home," said Comerford. "We have good horses for all of the international races, and he's a good companion for Mendelssohn as well. And there's good prize money, and why not have a go? We had a go with Idaho [who finished sixth as the favorite in the Sword Dancer] last year. I thought he would win. It really didn't work out, but it's just one of those days. You just try to win what races you can on the way."