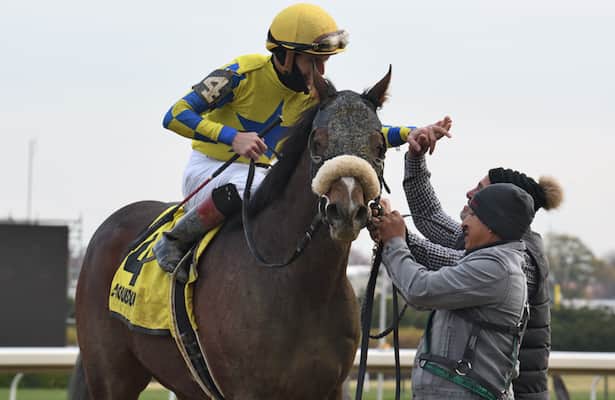 Hopeful Treasure wore down the pacesetter Chateau and staved off a late charge from Green Light Go to post an 18-1 upset in Sunday’s Grade 3, $200,000 Fall Highweight, a six-furlong handicap for 3-year-olds and up at Aqueduct Racetrack.

Trained by Michael Catalano Jr., who picked up his first graded-stakes win, the 4-year-old Oxbow ridgling entered from a smart six-furlong allowance score on Nov. 3 at Parx under returning rider Mychel Sanchez.

“He ran a monster race last out and he was just starting to come into himself. He was feeling great, and this was his owner's (Tony Como) idea. He said, ‘Let’s give this horse a shot,’ ” Catalano. said. “Tony has had the confidence in him from Day One. He ran a couple of good races in his past, he just needed some time to mature into himself and grow. He got a great ride from his jockey in his last start and today he got the same ride. It just worked out.”

Owned by Just In Time Racing, Hopeful Treasure (128 pounds) was making only his third stakes appearance. He tracked the speed of Chateau, who was carrying a field co-high of 131 pounds under Kendrick Carmouche, through splits of 22.51 seconds and 45.66 over the fast main track.

The victory marked the second graded-stakes score for Sanchez, who captured the 2018 Victory Ride (G3) aboard Dixie Serenade at Belmont Park.

Sanchez said he tried to repeat the winning formula from the Parx allowance score.

“I broke awesome and got in good position early in the race. I was always confident,” Sanchez said. “I knew I could go by the one horse (Chateau) any time. I was only concerned if anyone else was going to close better than him, but he got it done.

“I know him really well even though it’s only been my second time riding him,” added Sanchez. “I’ve worked him since he was a baby. I told the trainer and owner that he was going to compete and run his best race. They just had him ready.”

Hopeful Treasure made two previous stakes attempts, both in 2020 on the NYRA circuit, finishing fourth in the Gold Fever at Belmont and eighth in the H. Allen Jerkens (G1) at Saratoga Race Course.

“There’s a lot of options open for him now. Today was a good day for him,” Catalano said. “I just hope he gets back to the barn in good form and comes back as good as he’s been. We’ll see what the next task is.

“He’s learning his own running style,” Catalano continued. “He’s a horse that has a lot of ability that he doesn’t know what to do with yet. He’s trained exceptional and everyone has done a good job with him back at the barn.”

Green Light Go enjoyed a tremendous juvenile campaign, winning the 2019 Saratoga Special (G2) ahead of a runner-up effort to Tiz the Law in the Champagne (G1) at Belmont.

The 4-year-old Hard Spun colt, trained by Jimmy Jerkens, was making his first start since an off-the-board effort in the Vigil (G3) on Aug. 1 at Woodbine Racetrack.

Davis said Green Light Go will appreciate a stretch out in distance in future starts.

“He was sharp. I had to get into him early. He definitely needs more ground,” Davis said. “He was getting started late there, but he’s back on his game for sure. He put in his A game today. Jimmy thought we needed more ground. I think he’s back into form and I think you’re going to see a lot more of him.”

Live racing resumes Thursday at the Big A with a nine-race card. First post is 12:20 p.m. EST.

Early Voting and Jose Ortiz get it done in the 147th Preakness
The decision to skip the Kentucky Derby with Early...