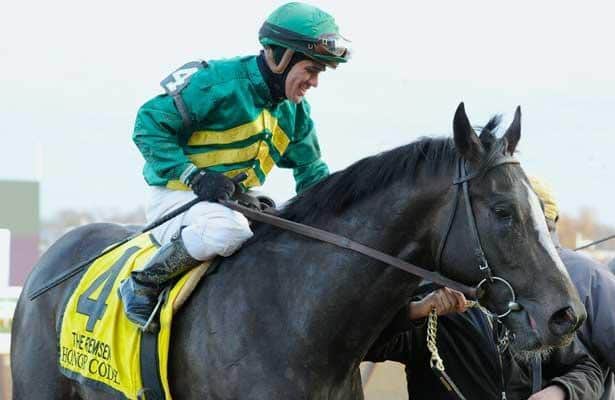 As long as there are no bumps along the way, highly regarded Honor Code’s road to Louisville for the first Saturday in May is coming through Hot Springs.

Hall of Fame trainer Shug McGaughey, who won his first Kentucky Derby last year with Orb, reiterated on Mar. 5 that Honor Code will make his 3-year-old debut in the $600,000 Rebel Stakes (G2) at Oaklawn Park March 15.

“It looks that way,” McGaughey said from his South Florida base. “So far everything looks good. He worked real good the other day and we’ll work him again on Sunday. The plane goes out there on the 13th so we’ve got plenty of time.”

Lane’s End Racing and Dell Ridge Farm’s graded stakes winner suffered a setback Jan. 18 when stressing his hind ankles while working at Payson Park in South Florida and he missed three weeks of training. McGaughey then moved him to his Gulfstream Park barn to keep closer watch on him and Honor Code was back on the work tab Feb. 12 and has not missed any time since. On Mar. 2, he traveled five furlongs in :59 for the sixth fastest move of 43 horses working the same distance.

“He’s a good looking horse, that’s for sure,” said the trainer, who will accompany him to Hot Springs.

When breaking his maiden impressively at first asking Aug. 31, Hall of Famer John Velasquez was in the irons and next out in the Champagne Stakes (G1) Irad Ortiz, Jr. was aboard. His pilot for the Remsen was 2013 Eclipse Award winner Javier Castellano.

“I’ve still got time to figure out who the rider will be,” McGaughey said.

The Rebel Stakes is in the championship series of the Kentucky Derby points system and 50-20-10-5 points will be awarded for finishes from first through fourth.  Since Honor Code hasn’t started since the Remsen on Nov. 30, he currently stands in 11th place on the Derby entry points list with 14. If he runs well and likes the track, McGaughey would likely send him back for the $1 million Arkansas Derby when 100 points and Grade 1 status come with the victory.

Head to Head: Handicapping the 2022 Southwest Stakes
Seven of the thirteen runners of the Smarty Jones...
x close