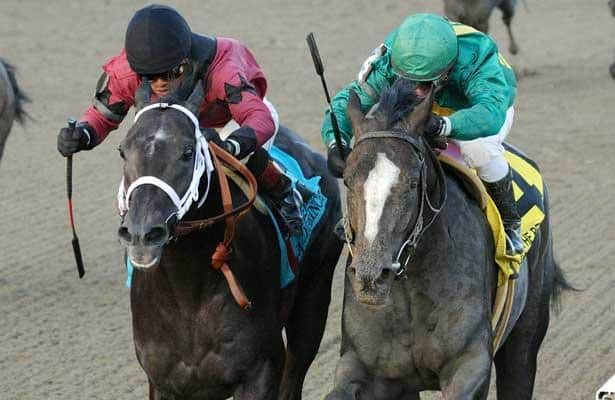 Honor Code’s scheduled 2014 debut in the $400,000 Fountain of Youth (G2) at Gulfstream Park on Feb. 22 is in serious doubt due to a minor issue discovered by trainer Shug McGaughey.

“We had a little setback. He’ll go back to the track on Friday,” McGaughey said Wednesday. “He bruised up his back ankles a little bit. I think he’ll be fine. I wasn’t sure about what was the matter with him. Now I think we have it pinpointed.”

Honor Code, who is in training at Payson Park in Indiantown, FL, hasn’t raced since capturing the Remsen Stakes (G2) at Aqueduct on Nov. 30. The 3-year-old son of A.P.Indy won the Remsen by a nose over Cairo Prince, who romped to victory in the $400,000 Miller Lite Holy Bull (G2) at Gulfstream last Saturday.

“He’ll go back to the track Friday and see how he goes,” said McGaughey, who saddled Orb for victories in the Fountain of Youth, Florida Derby and Kentucky Derby last year. “The Fountain of Youth isn’t likely. Where we’ll go, I don’t know. The Gotham (G3, Aqueduct, March 1) is a possibility.”

McGaughey said the likely absence of Honor Code in the Fountain of Youth increases the chances that Top Billing’s participation in the 1 1/16-mile prep for the $1 million Besilu Stables Florida Derby (G1) at Gulfstream on March 29.  McGaughey saddled Top Billing for a sharp last-to-first 2 ¾-length triumph in an allowance race on the Holy Bull undercard.