Honor A. P. looks to make own trip as the Shared Belief favorite 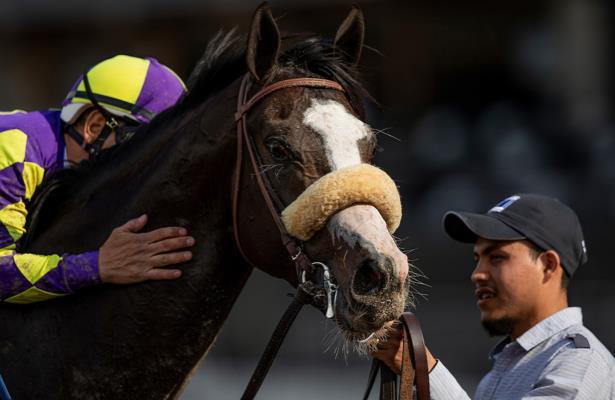 As he was getting ready to school Honor A. P. on Wednesday morning, trainer John Shirreffs cracked a joke about the weather for Saturday’s running of the Shared Belief Stakes.

“If there’s a strong, on-shore breeze, we don’t want the lead,” he said. “Down at ol’ Del Mar that wind can be blowing pretty strong.”

As he was channeling a little Bing Crosby, Shirreffs was laughing. But he also said “I’m pretty serious about that,” since it could be a disadvantage to a pacesetter on the backstretch of a two-turn race. “It’s always nice if somebody is setting the pace, right? Then your horse gauges the race from the pacesetter. When nobody is setting a pace, it’s a little bit different.”

Therein lies the challenge for Honor A. P., the likely favorite for the 1 1/16-mile race that will be his last before the Sept. 5 running of the Kentucky Derby (G1).

In a field that is expected to have only four starters, either Honor A. P. or Bob Baffert’s $3.65 million colt Cézanne figure to have the early lead. Another Baffert colt, Thousand Words, and long shot Kiss Today Goodbye look to come from off the pace. (Uncle Chuck and Anneau d’Or were expected to be scratched and re-aimed for races next weekend.)

“I think more about my horse than the other horses,” Shirreffs said. “I don’t really handicap the other horses other than if it looks like this horse has got speed and will go to the lead or something like that. I just hope that Honor A. P. is prepared well enough that he can run his race.”

It may come down to the jockeys reading and reacting, especially Mike Smith on Honor A. P. and Flavien Prat on Cézanne, the 2-for-2 colt that may need to win this race to be assured of getting into the Derby.

“Mike is a Hall of Fame rider,” Shirreffs said. “He’s going to figure it out. I don’t tell Mike what to do.”

Smith has ridden all four of Honor A. P.’s races, including a 2 3/4-length triumph June 6 in the Santa Anita Derby (G1), the race that moved bettors to make the Honor Code colt the firm second choice in futures betting for the Kentucky Derby. He is best-priced at 11-2 (+550) at Circa Sports in Las Vegas compared with Belmont Stakes winner Tiz The Law at 11-5 (plus 220).

It has been 56 days since that last victory. But Shirreffs is not worried about that at all. Not when this will actually be the shortest break between races in Honor A. P.’s career.

The bigger issue for handicappers and horseplayers might be that this race is only 8 1/2 furlongs. Traditionally the last prep for Derby horses is nine furlongs, the distance of the Santa Anita Derby. But Shirreffs is not worried about that, either.

“This is like a little half-step backward, but that’s what we have,” said Shirreffs, who chose to stay home rather than ship to a longer race. “I think Honor A. P. really appreciates a mile-and-an-eighth. The longer they go the better it is for him. It’s not concerning. It’s just another little wrinkle.”

Marveling at Honor A. P.’s “efficient stride,” Shirreffs has watched a succession of six weekly morning workouts that included a four-furlong bullet in late June.

“He’s been training really well,” he said. “He looked really good (Wednesday) morning galloping. What he does, he does easily.”

Maybe too easily for some tastes. It has been suggested that being lightly raced, Honor A. P. has some catching up to do with Tiz The Law and Blue Grass Stakes (G2) winner Art Collector.

“Everybody has a right to express their opinion,” Shirreffs said. “I hardly ever read any of that. I just want the race to go off normally and not have any issues and get on to the next one.”

That next one would be the race that Shirreffs famously won with 50-1 long shot Giacomo. But that was in May of 2005, not September of 2020. The calendar makes a big difference, since it has afforded horsemen a chance to see if their 3-year-olds really belong in classic company. For that reason Shirreffs sees this year’s Kentucky Derby as being much less mysterious and potentially more competitive.

“People that maybe would take a shot in May won’t do it in September,” he said. “When the Derby is run in May, nobody really knows who’s going to go a mile-and-a-quarter. In May you might get some horses that show a lot of speed, which of course would help a closer, where in September they might say they already know their horse can’t go that far, so why are we even trying?”

Also unlike 15 years ago, Shirreffs is not sneaking up on anyone with Honor A. P. With the extra time until this year’s running, he has grown comfortable with being among the favorites – and among the hunted.

“You’ve got to enjoy it all,” he said with the same warm laugh that he had about the Southern California sea breeze. “I remember enjoying it a lot with Giacomo going to Churchill Downs. That was exciting. It’s going to be exciting again.”

* With two wins and two seconds in her four graded stakes, Hard Not To Love races Sunday at Del Mar in the 8 1/2-furlong Clement L. Hirsch (G1), a qualifier for the Breeders’ Cup Distaff (G1).

* Coming off his close, second-place finish to Maximum Security in last week’s San Diego Handicap (G2), Midcourt is widely expected to go Aug. 22 in the Pacific Classic (G1). “We’ll see,” Shirreffs said. “I don’t want to commit right away. We’ll see how he is in the next couple weeks.”

* Graded-stakes-winning 4-year-olds Nolde and Carressa have been on long layoffs and are expected back in the barn this fall. “We just gave them some time off,” Shirreffs said.