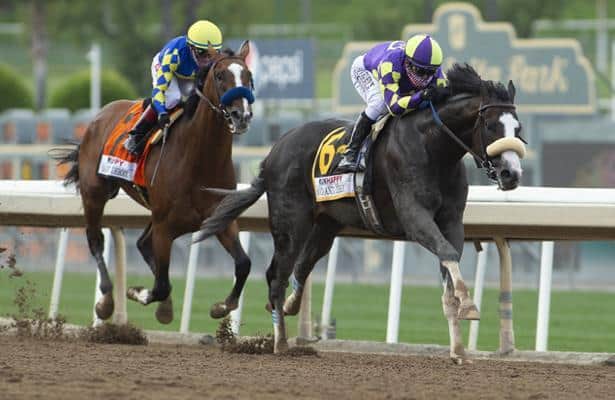 Three months after Authentic defeated Honor A. P. by 2 1/4 lengths in the Grade 2 San Felipe Stakes, the tables turned Saturday.

With a sweeping move off the turn, Honor A. P. flew past his familiar rival and drove to a victory in the $400,000 Santa Anita Derby (G1).

Trained by John Shirreffs for C R K Stable, Honor A. P. was making just his fourth career start and was eligible to improve after his prior meeting with Authentic the exit of a long layoff.

"We knew that he has tactical speed and Mike (Smith) can put him pretty much where he wants," Shirreffs said. "On the backside, we hoped he would get comfortable to have a nice little kick in the end, and it all worked out well."

Authentic, who won on uncontested leads to begin his career 3-for-3, broke outwardly and had to settle three-wide most of the way. The Bob Baffert trainee lacked the same late kick in his first defeat.

Honor A. P. finished up in 1:48.97 under the Hall of Famer Smith, who has said “every indication” shows this Honor Code colt should especially relish the Sept. 5 Kentucky Derby’s 1 1/4 miles.

Making moves like his sire! HONOR A.P. digs in and sweeps up the Runhappy Santa Anita Derby! @santaanitapark pic.twitter.com/ndFYEld7vW

“Just the way he does, the way he galloped out even today, he galloped, and I had to pull him up,” said Smith, who’s now won the Santa Anita Derby three straight years. “He just keeps going with that big stride. It’s almost like horses have to take two to his one, it seems like. …

“John’s done a great job of putting some good, long works into him and really galloping out. So he had a lot of air in him today.”

Shooters Shoot, who entered off an allowance optional claiming win in April at Oaklawn Park, set the opening fractions Saturday of :23.07 and :46.88. Honor A. P. stayed close to that pace before tipping out four-wide coming into the stretch and taking the lead.

"I was afraid of being on the outside," Baffert said of Authentic. "He broke out and then caught his stride. He did all the heavy lifting all the way around to the stretch. Mike Smith just sat back there and does what he does. The winner ran really well.”

Rushie filled out the board with Anneau d’Or fourth in the field of seven. The top-four finishers were awarded Kentucky Derby qualifying points on a 100-40-20-10 scale.

Among horses who are still on the Derby trail – Charlatan joined Baffert stablemate Nadal as a defection from that list late Saturday afternoon – Honor A. P.’s 120 points rank second only to Tiz the Law’s 122.

The Kentucky-bred Honor A. P. sold for $850,000 at the 2018 Fasig-Tipton New York Saratoga Select Yearling Sale. He debuted a runner-up last August at Del Mar, broke his maiden two months later at Santa Anita, returned March 7 with his second-place run in the San Felipe Stakes, then became a Grade 1 hero Saturday in the Santa Anita Derby.

“It seems like the farther you go with him, he’s just got that big, long, powerful, beautiful stride,” Smith said.

Shirreffs and Smith teamed up for a Kentucky Derby triumph in 2005 with Giacomo. Fifteen years later, Honor A. P. figures to give the duo another big chance under the Twin Spires.

“Now that it’s in September, we should even see a bigger, stronger horse by then,” Smith said.

“He should get every bit of that mile and a quarter.”