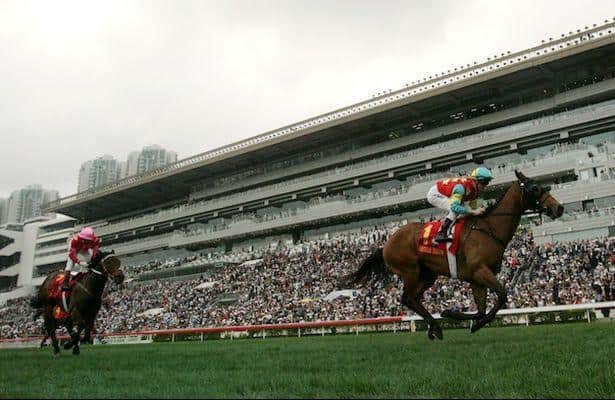 No. 3 Smoothies is yet to race on the dirt, but he did put in an impressive trial effort on the surface at Conghua. He’s worth taking a chance on here as he makes his dirt debut. No. 1 Toycoon is expected to lead, especially with Angus Chung’s apprentice claim taking 10-pound off his back. He could take catching. No. 9 Yes We Can knows what racing on the dirt is all about. He should be thereabouts for Silvestre de Sousa. No. 7 Our Creed is a tricky customer, but he’s shown capabilities at times. Expect a strong showing with Zac Purton engaged.

No. 10 Jubilation has tumbled to a competitive rating. He returns first up here following a solid trial effort on the dirt. Expect a forward showing with added maturity against this company. No. 13 Pakistan Zindabad has mixed his form but did show added improvement in this grade last season. Zac Purton gets up now, and he’s favored at the bottom of the handicap. No. 3 Buddy Spirit has to show something soon enough. He’s found a competitive mark and has claims. No. 8 Run Run Good is due a first win. He gets his chance here from an ideal gate on the dirt.

No. 2 California Spangle should find the front and demolish this field. He’ll be a short price to do so, but it is more than justified with his record and trajectory. This is his race to lose, which he shouldn’t be doing. No. 4 Healthy Happy is consistent and looks capable of boxing on for second with an ideal run throughout. No. 3 Duke Wai is capable and did well to finish third in his first race off the bench. He takes plenty of benefit from that first-up effort, even if winning this contest looks unlikely. No. 6 Cheerful Days has a powerful finish on his day. Look for him challenging late.

No. 5 Turbo Power caught the eye with a surging run from the tail of the field first up. He can take another step forward here, and it appears as though he’s ready to finally win in this grade. No. 6 Sweet Encounter debuts. His latest trial was ordinary as he bounded at the start and missed the kick badly. Still, he’s shown more ability in the past and is expected to put in a forward showing on debut. No. 9 Double Show is consistent and getting close to a first win for the in-form Hewitson-Whyte combination. No. 1 Fun N Glory is worth keeping safe.

No. 2 The Hulk did well first-up to finish second behind the impressive Victor The Winner. Expect he’s come on from that effort, and he is favoured remaining in Class 4. A strong showing is expected with Angus Chung’s 10-pound claim in use. No. 1 Happy Dailly returns to a suitable grade following a sound first-up effort. Zac Purton’s booking bears close watching. No. 13 Jack Win appears better than his record suggests. He looks like he’ll relish getting out to this trip. He’s worth a small each way ticket. No. 6 Stunning Impact is next best.

No. 6 Classic Posh can fire fresh, and he’s capable of doing so here. David Hall’s off to a strong start, and the Testa Rossa gelding can maintain his handler’s good fortune. He’s consistent and ticks a few boxes. No. 1 Metro Warrior has the class and the experience down the Sha Tin straight to be winning here. Definite leading player with Zac Purton engaged. No. 14 Ka Ying Spirit won well first up but does rise in grade now. Still, he slots in light, and the outside draw is incredibly ideal. No. 13 Super Axiom will look the winner at some stage out in front.

No. 11 King Of The Court has plenty of ability, and it’s hard to see how he isn’t already a winner in Hong Kong. Perhaps a change in environment can spark him up, and if he shows any ability that we know he has, then he is going to be putting a big amount of pressure on this group. No. 4 Universal Horizon won well on debut in Hong Kong. He looks like an emerging talent who can surely contend. No. 2 Super Sunny Sing won well last start. Expect another forward showing as Chris So has this horse in superb form. No. 6 Youthful Deal has claims. Next best.

No. 11 Hit The Shot is better than his record suggests, and it wouldn’t surprise to see him find his best here. He moved well in a recent trial, and following the break between seasons, he appears to have come on in bounds. No. 13 Boom Alliance went close early on in his last campaign. He’s shown the potential and has since caught the eye at the trials. No. 3 Powerful Wings is looking to snap a run of consecutive runner-up efforts. He’s acclimatized now and is very, very close to a first win. No. 9 Looking Cool is consistent and has trialed very well.

No. 11 A Pal faces a stiff task to win on debut, however, his latest trial was nothing short of impressive. He gets a nice weight, and the booking of Derek Leung should ensure he gets his chance. His form in Australia was solid, and he looks to have already acclimatized to Hong Kong. No. 8 Tuchel showed a stack of class last term with a pair of wins, and he should hit the ground running this weekend. No. 6 Never Too Soon was caught with too much work to do last start. He can bounce back. No. 12 Infinite Power mixes his form but has the class to figure.

No. 3 Fantastic Way doesn’t know how to run a bad race. He looks very, very well placed here off a rating of 91, especially after his tidy trial effort on the dirt. No. 9 Rock Ya Heart could be value, and if so, he is worth taking an each way ticket on. He can perform first up, and he does boast a win over California Spangle in the past. No. 11 You’remyeverything is chasing a hat trick of wins. He has the potential to kick on here and Angus Chung’s 10-pound claim is a very big assistance. No. 2 Fantastic Treasure appears to have put soundness issues behind him. Keep safe.