New partners have a 'special horse' in Oaks hopeful Shedaresthedevil 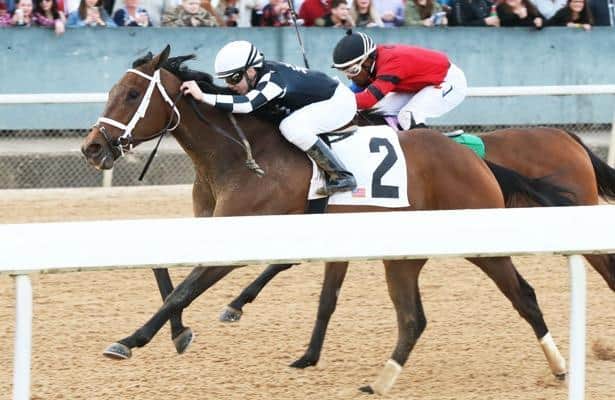 A first-level allowance race Feb. 15 at Oaklawn Park not only produced a starter for Saturday’s Honeybee Stakes (G3) for 3-year-old fillies. It produced the winner, too.

Shedaresthedevil, under the patient handling of Joe Talamo, split horses near the sixteenth pole en route to a three-quarter length victory over favored Alta’s Award in the major 2020 Kentucky Oaks prep.

“This is what we kind of anticipated the horse could be,” co-owner Autry Lowry said moments after the victory. “We thought she could be a special horse. Didn’t know where we would end up, but she seems to be getting better every day.”

Shedaresthedevil was making her second start for trainer Brad Cox and co-owners Staton Flurry of Hot Springs, Ark., Qatar Racing LTD (David Redvers) and Big Aut Farms (Lowry). The daughter of Daredevil had previously been based in Southern California with trainer Simon Callaghan and Qatar Racing before being sold for $280,000 at Keeneland’s November Breeding Stock Sale.

“We looked at the filly; we vetted her out,” Flurry said. “We kind of found out Qatar Racing was interested in her and they approached us about going in as partners. We knew going in we were going to be partners with Qatar Racing, if we could get her. My buddy, Autry Lowry, we had been looking at several horses in the sale and we got this one.”

Flurry said Lowry, a captain in the Benton, La., fire department, owned a share in Daredevil, a Grade 1 winner, and thought it would be nice to own one of his most promising early runners. Shedaresthedevil is from the first crop of Daredevil, who began his stud career at WinStar Farm in Kentucky before being recently relocated to Turkey.

Qatar Racing, which has campaigned, among others, European star Roaring Lion and Grade 1 winner Peace and War, owns 50 percent of Shedaresthedevil, Flurry said, adding he has a 35 percent share and Lowry the remaining 15 percent. Flurry said Shedaresthedevil is the first horse he’s owned with Lowry.

“Autry and I have been buddies for eight, nine years,” Flurry said. “We were all in on a suite at Louisiana Downs for several years and we’ve become real good friends.”

Shedaresthedevil finished third in the Sorrento Stakes (G2) on Aug. 3 at Del Mar and second as the favorite in her final start at 2, the Anoakia Stakes on Oct. 13 at Santa Anita. The filly ran second in her 2020 debut last month, beaten three-quarters of a length by stablemate Bonny South in the first-level allowance spot at 1 1/16 miles.

Cox opted to split up the fillies, pointing Shedaresthedevil to the Honeybee and Bonny South to the Fair Grounds Oaks (G2) on March 21 at Fair Grounds.

“Both of them ran a great race that day,” Cox said of the allowance meeting.

Shedaresthedevil earned 50 points for the victory to secure a spot in the Kentucky Oaks, but Cox said she’ll probably make her next start in the $600,000 Fantasy Stakes (G3) April 10.

The 1 1/16-mile Fantasy is the final major local prep for the Kentucky Oaks, the country’s biggest race for 3-year-old fillies.