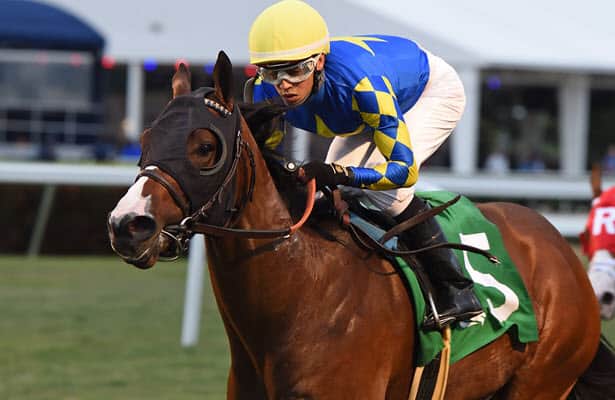 In just three races, Tarantino has shown the promise of a future turf star, but his connections are hoping that the Triple Crown will be in the future of the son of Pioneerof the Nile following Saturday’s $200,000 Holy Bull (G3) at Gulfstream Park.

Tarantino, who is a nose away from being undefeated, is scheduled to make his debut on dirt in the 1 1/16-mile race for 3-year-olds on the road to the Florida Derby (G1).

Tarantino began his career for Hall of Fame trainer Bob Baffert in Southern California, where he captured his career debut Sept. 20 at Del Mar and came back to finish second by a nose in the Oct 4 Zuma Beach Stakes at Santa Anita – both races at a mile on turf – before being transferred to Brisset.

“It took him a couple weeks to get used to our routine. It’s a little bit different than what Bob Baffert had,” said Brisset, whose trainee has had a series of four workouts at Palm Meadows, Gulfstream’s satellite training facility in Palm Beach County, for his dirt debut. “He was breezing pretty well for a while and then in his last work before we ran him at Gulfstream, he went a half on dirt in 48 (seconds) out in 1:12-and-change.”

A decision was made that Tarantino would run in a Dec. 11 optional claiming allowance scheduled for a mile on turf at Gulfstream, rain or shine. The Kentucky-bred colt closely stalked the pace before drawing away to victory.

“We did want to find out if he can run on the dirt, but the rain stopped and the race stayed on the grass,” Brisset said. “He won pretty nicely. He won by two, but I’m pretty sure we didn’t go to the bottom of the horse.”

Tarantino’s dam, Without Delay, registered her only victory on turf, but the daughter of Seeking the Gold did produce Before You Know It, a daughter of Hard Spun who earned more than $300,000 and was a stakes winner and a graded-stakes runner-up on dirt.

Edgard Zayas, who was aboard for Tarantino’s victory at Gulfstream, has the return mount.

Greatest Honour ‘Good’ to Go in Florida Derby Prep
Hall of Fame trainer Shug McGaughey was dreaming of a bright future for Greatest Honour as he watched the 3-year-old son of Tapit school in the Gulfstream Park paddock and walking ring without turning a hair between races on Wednesday.

“He’s developed a lot. I was just sitting there thinking if he goes through the winter and spring and keep going in that direction, he can be good,” McGaughey said.

Greatest Honour finished a late-closing third while sprinting in his first two starts, before stretching out two turns at Aqueduct Nov. 8 to finish second, beaten by just a head by Known Agenda, who went on to finish third in the Remsen (G2). The Courtlandt Farms homebred broke through to graduate, closing from seventh to win going away in a 1 1/16-mile maiden test at Gulfstream Dec. 26.

“The farther, the better for him. I think he can run all day,” McGaughey said. “He’s got enough of a kick that if he gets a little pace, he can challenge here.”

McGaughey’s also confident that the more experience he gets, the better Greatest Honour will be.

“He’s a Tapit, so we had to work around some things, but he’s really good now,” said McGaughey, who named Jose Ortiz to ride Greatest Honour.

McGaughey will seek to add the Holy Bull to the extensive list of achievements on his Hall of Fame resume that includes victories in the Fountain of Youth (G2) and Florida Derby (G1) with Orb in 2014. Orb went on to give McGaughey his first Kentucky Derby success.

“Their running styles are similar – they both come from behind, but pedigree and looks-wise they’re different. This horse is taller, while Orb was more compact,” McGaughey said.

“If he’s ever going to get two turns it will be here,” said Joseph of the 1 1/16-mile headliner on Saturday’s 12-race program with five graded stakes. “It’s kind to horses with speed like himself and there’s a short wire. I think it’s a good spot to try.”

The Holy Bull will be Awesome Gerry’s first try around two turns…on a conventional one-mile track. The son of Liam’s Map wrapped up his juvenile campaign with a close second in the seven-furlong Jean Lafitte Stakes around the two turns of the ‘bullring’ at Delta Downs.

Racing with blinkers for the first time, Awesome Gerry showed the way into the stretch before finishing third, 2 ¾ lengths behind victorious Mutasaabeq and 8 ½ lengths ahead of the fourth-place finisher.

“The last time he ran a mile I thought he handled the distance. He stayed on after he was passed,” Joseph said. “We’re going to give him another go at it. He’s training very well. I think he’s going to run a bang-up race.”

Awesome Gerry won the first two races of his career at Gulfstream and Gulfstream West before hitting the road to finish fourth in the Nyquist at Keeneland and second in the Jean Lafitte.

“I worked him with blinkers again, and he relaxed much better. I think he’s going to run a good race,” said Joseph, who named Tyler Gaffalione to ride the colt owned by John Fanelli, Cash is King LLC and LC Racing LLC.