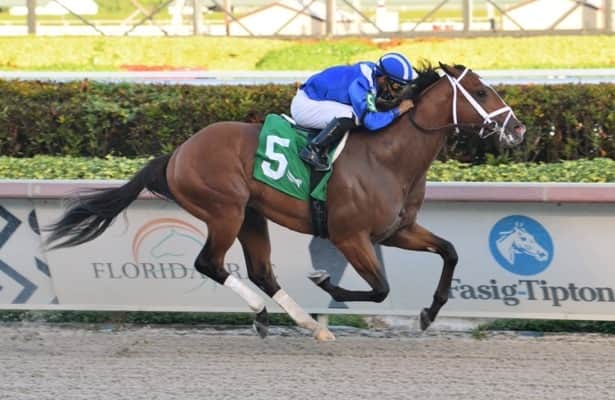 Grade 2 winner Mutasaabeq, who captured the Mucho Macho Man Jan. 2 in his season debut, and Grade 3 winners Pickin’ Time and Sittin On Go are among 22 sophomores nominated to the $200,000 Holy Bull (G3) Saturday, Jan. 30 at Gulfstream Park.

The 30th running of the 1 1/16-mile Holy Bull is the next step for 3-year-olds on Gulfstream’s road to the March 28 Florida Derby (G1), and headlines a program featuring five graded-stakes worth $600,000 in purses.

Shadwell Stable’s Mutasaabeq was a popular 1 ½-length winner of the one-mile Mucho Macho Man, his return to the main track after winning the 1 1/16-mile Bourbon (G2) on grass and finishing 10th in the Breeders’ Cup Juvenile Turf (G1). The next four horses that finished behind him – Papetu, Awesome Gerry, Pickin’ Time and Ultimate Badger – are also nominated to the Holy Bull.

John Bowers Jr.’s New Jersey homebred Pickin’ Time won the Smoke Glacken at Monmouth Park and Nashua (G3) at Aqueduct in back-to-back starts last fall before a pair of fourth-place finishes in the 1 1/8-mile Remsen (G2) Dec. 5 and the Mucho Macho Man, where he wound up beaten 11 ¼ lengths after a troubled start.

Albaugh Family Stables’ Sittin On Go has been training forwardly at Gulfstream for trainer Dale Romans ahead of his 3-year-old debut. Winner of his first two career stats in Kentucky, including the Iroquois (G3), before finishing ninth in the Breeders’ Cup Juvenile (G1) and sixth in the Kentucky Jockey Club (G2), a race where Romans-trained stablemate Smiley Sobotka and fellow Holy Bull nominee ran second by less than a length.

Slam Dunk Racing’s Drain the Clock, Saffie Joseph Jr.-trained stablemate of Awesome Gerry, exits a 7 ½-length romp as the favorite in the six-furlong Limehouse Jan. 2 at Gulfstream. The Maclean’s Music colt has won all three races he has finished, losing his rider when the irons broke in the Jean Laffite Nov. 30 at Delta Downs.

Along with being nominated to the Swale, John Minchello’s Competitive Speed is among 16 3-year-old filly nominees to the $100,000 Forward Gal, also contested at seven furlongs. She is joined by Gulf Coast, half-length winner of the one-mile Cash Run Jan. 1 at Gulfstream; Shea D Summer, fourth in the Cash Run after winning the Juvenile Fillies Sprint Nov. 14 at Gulfstream Park West; Gasparilla winner Adios Trippi; and Gone to Cabo and Dial to Win, respectively third and fifth in the Glitter Woman.