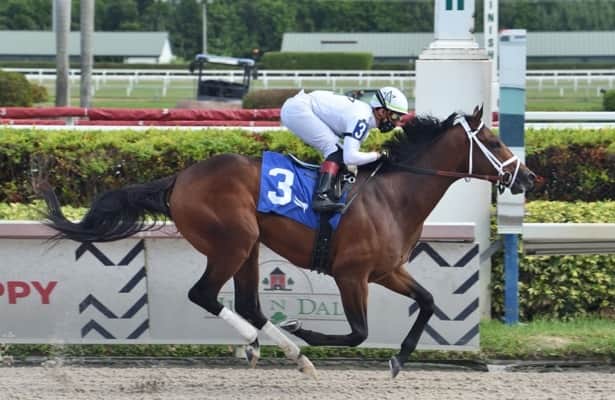 The $200,000 Grade 3 Holy Bull is the first of three official Kentucky Derby qualifying races at Gulfstream Park. The 1 1/16-mile stake, which offers the top four finishers Derby points (10-4-2-1), drew a field of nine, including a pair of impressive debut winners for Todd Pletcher.

In 2006, Barbaro won the Holy Bull, went on to victory in the Florida Derby, and then became a rare unbeaten Kentucky Derby winner.

Here is a full field analysis for the Holy Bull, which is carded as race 11 out of 12, with post time scheduled for 4:50 pm E.T. The morning-line odds are provided by the Horse Racing Nation staff.

1) Jirafales (20-1 – Social Inclusion – Gustavo Delgado / John Velazquez – 1: 1-0-0 - $21,600) Jirafales broke his maiden at first asking with a late run by almost five lengths at Gulfstream Park West against Florida-breds. He has been off since that November victory. Toss.

2) Willy Boi (20-1 – Uncaptured – Jeff Engler / Junior Alvarado – 2: 2-0-0 - $48,000) This Florida-bred will make his debut against open company following two pace-pressing victories against state-breds at Gulfstream Park. Jeff Engler, who has been training since 2009, is seeking his first win in a grades stake. Toss.

3) Papetu (10-1 – Dialed In – Antonio Sano / Leonel Reyes – 5: 2-1-0 - $78,325) Papetu won his first two starts at Gulfstream Park during the summer at short odds for local trainer Antonio Sano while sprinting 5 1/2 furlongs. At Saratoga, he tried graded stakes while twice running into the speedy Jackie’s Warrior, which was tough for a horse that prefers to be on the lead. After a four-month layoff, Papetu came back to run second behind Mutasaabeq going the one-turn mile. Use in exotics at good odds.

5) Tarantino (8-1 – Pioneerof the Nile – Rodolphe Brisset / Edgard Zayas – 3: 2-1-0 - $77,000) Tarantino was purchased for $610,000 as a yearling by a high-powered partnership of past Kentucky Derby winners. He is the winner of two of three starts at a mile on the turf with maiden and allowance victories, along with a second in a stake at Santa Anita. He’s been training in Florida for Rodolphe Brisset. The dam of Tarantino produced a stakes winner on the dirt. Goes turf to dirt.

6) Prime Factor (5-2 – Quality Road – Todd Pletcher / Irad Ortiz Jr. – 1: 1-0-0 - $24,000) Prime Factor lived up to the promise of being a $900,000 yearling purchase when he won his debut at Gulfstream by almost nine lengths at odds of 2.10-1. That victory was at six furlongs with basically a front-running effort. The son of Quality Road and a Bernardini mare is bred to handle any distance. In the Kentucky Derby Future Wager Pool 2, he was the sixth choice among the individual offerings at 21-1. Since his maiden win at Gulfstream in December, Prime Factor has been training at Palm Beach Downs for Todd Pletcher. Top choice.

7) Greatest Honour (6-1 – Tapit – Shug McGaughey / Jose Ortiz – 4: 1-1-2 - $56,200) It took this Courtlandt Farm home-bred four tries to break his maiden. In that race he was sent off at odds of .50-1 and he beat a highly regarded Todd Pletcher runner while rallying from off the pace going two turns. Greatest Honour’s dam sold for $2.2 million later in the year that he was born. He was well-regarded enough to be included in the Kentucky Derby Future Wager Pool 2, where he closed at odds of 40-1. The progeny of Tapit frequently need time to mature, but it is worth noting that he ran into very strong fields in his first three races. Win contender.

8) Sittin On Go (5-1 – Brody’s Cause – Dale Romans / Corey Lanerie – 4: 2-0-0 - $167,520) Sittin On Go is the only graded stakes winner in the Holy Bull field. He won his first two starts, which included a late-running victory in the Iroquois (G3) at Churchill Downs in September going a one-turn mile. His last two starts, which also came as 2-year-old, produced a ninth in the Breeders’ Cup Juvenile and then a sixth in the Kentucky Jockey Club (G2). Sittin On Go has been off since and has been training for Dale Romans at Gulfstream. Use underneath.

9) Awesome Gerry (10-1 – Liam’s Map – Saffie Joseph Jr. / Tyler Gaffalione – 5: 2-1-1 - $74,850) This son of Liam’s Map was a debut winner in July at Gulfstream going five furlongs, and the second- and third-place finishers both came back to win. With almost three months between races, he won an allowance in October at Gulfstream West. In the Mucho Macho Man earlier in the month he set the pace and finished third. Toss.

Summary: The 2021 edition of the Holy Bull is an interesting mix of horses with some stakes experience and those with impressive maiden victories. Sittin on Go is the only stakes winner, with a victory in a Grade 3 last year. Prime Factor, Greatest Honor, and Amount come to the race with fancy pedigrees and high-profile connections following eye-catching maiden wins.

It will be interesting to see what odds will come with Greatest Honour. His maiden win came at Gulfstream at this distance against a strong field. His first three defeats were against three of the best maiden fields to be run all year at Saratoga, Belmont Park and Aqueduct. It is worth noting that jockey Luis Saez, who rode Greatest Honour last race, has opted to ride Amount.