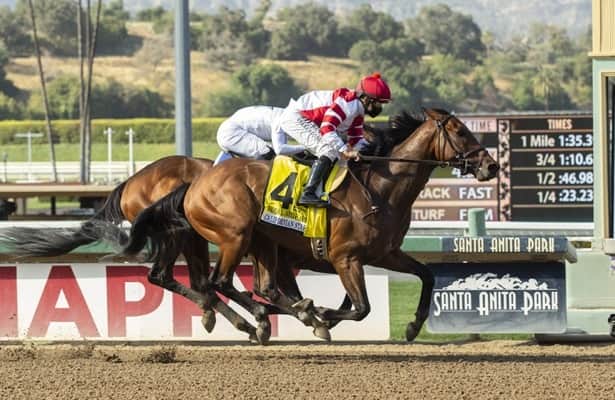 The Grade 1 Hollywood Gold Cup will be run on Monday as part of the Memorial Day card at Santa Anita Park that includes three Grade 1 stakes. The 1 1/4 mile contest drew a field of five horses from the older male dirt division.

In addition to the first-place share of the $400,000 purse, the winner of the Gold Cup will have finally earned a Grade 1 victory.

Here is a full-field analysis for the Hollywood Gold Cup with odds provided by the Horse Racing Nation staff. With post time scheduled for 5:30 p.m. EDT, the Gold Cup is carded as race 4 out of 10.

1. There Goes Harvard (6-1 – Will Take Charge – Michael McCarthy / Irad Ortiz, Jr. – 11: 3-5-2 - $215,090) There Goes Harvard was a recent winner of two allowances at Santa Anita, first on the main track and then on the grass course just two weeks ago. Last summer, this son of Will Take Charge ran second in the Ellis Park Derby and then was away from the races for seven months. Only once in 11 starts did he fail to finish in the top 3 and that was when he lost his rider in the early going. Trainer Michael McCarthy must be taking a chance in the Gold Cup because he has an improving 4-year-old. Live long shot.

2. Royal Ship (9-5 – Midshipman – Richard Mandella / Mike Smith – 16: 7-2-3 - $342,405) The 6-year-old, Brazil-bred Royal Ship began his career in South America where he was as a Group 1 winner on the turf. In 2021, he was moved from turf to dirt by Richard Mandella and won the Californian (G2) and then fell a head short of winning the Gold Cup behind Country Grammer. Last month, Royal Ship came back from a seven-month layoff to win a listed stake at Santa Anita by five-lengths. Top choice.

3. Spielberg (15-1 – Union Rags – Sean McCarthy / Flavien Prat – 13: 3-3-2 - $538,900) Since Spielberg became a Grade 2 winner as a 2-year-old in the Los Al Futurity, he raced seven times with just one allowance victory in his 2022 debut at Santa Anita. Since then, the former Bob Baffert runner found the competition tough in the older male division. The son of Union Rags was fourth twice in races won by Express Train and then was a distant third in the four-horse Californian (G2). Toss.

4. Defunded (3-1 – Dialed In – Sean McCarthy / Abel Cedillo – 8: 3-2-1 - $257,100) Defunded is a two-time allowance winner, back in August of 2021 at Del Mar and then following a nine-month layoff just three weeks ago at Santa Anita in his first start for Sean McCarthy. Last year as a 3-year-old, he was second twice in Grade 3 stakes. In his eight career starts, Defunded did not run farther than 1 1/16 miles, but he never finished worse than fourth. Use underneath.

5. Stilleto Boy (3-2 – Shackleford – Ed Moger, Jr. / Juan Hernandez – 15: 3-3-6 - $1,031,175) Stilleto Boy turned the tables on Express Train when he cut back to the nine furlongs in the Californian (G2) and fought off all challenges to win on the front-end. That was his first graded stakes win in 15 starts, but he will have to stretch back out to ten furlongs once again with a distant third last time in the Santa Anita Handicap (G1). The one to beat.

Summary: The field of five in the Hollywood Gold Cup is without a Grade 1 victory in America and also lacks a win going ten furlongs. That had to be good news for the connections of Stilleto Boy who was a front running winner of the nine-furlong Californian Stakes last month. Going to the lead worked in that race and, in this field where the others are not particularly fast, it is likely that Stilleto Boy will once again go to the lead and play catch-me-if-you-can.

The main competition for Stilleto Boy will come from Royal Ship who just missed winning the Gold Cup last year by a head after having the lead in the stretch. Royal Ship’s comeback victory says he will be ready for a good effort again this year and he will be my top pick considering that Stilletto Boy will have the shortest odds of his career and has never won two races in a row.