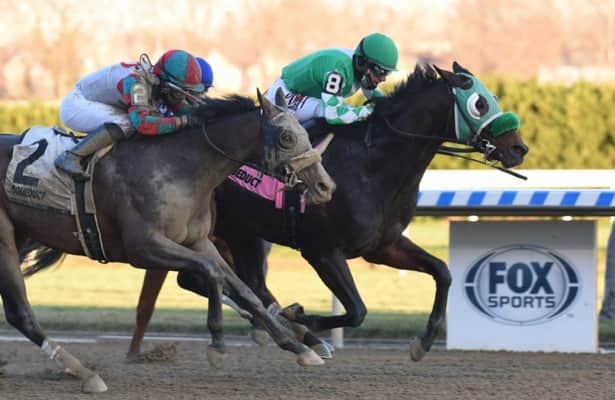 Hold the Salsa ran down Market Alert in the final furlong and fended off It’s Gravy’s late bid from the outside for a victory by a neck in Sunday’s $250,000 New York Stallion Stakes Series Great White Way in the final stakes of the 18-day fall meet at Aqueduct Racetrack.

Owned, bred and trained by Richard Lugovich, Hold the Salsa registered his second stakes win in three attempts, adding to his victory in the Bertram F. Bongard on Oct. 2 at Belmont going seven furlongs.

Running the same one-turn distance in the 36th running of the Great White Way for eligible New York-sired juveniles, Hold the Salsa was kept off the speed by jockey Junior Alvarado as The King Cheek led the 11-horse field through the opening quarter-mile in 22.80 seconds on the fast main track.

Hold the Salsa holds on to the lead in the NYSSS Great White Way with @JuniorandKellyA! #TheBigA pic.twitter.com/GmidE2O2f6

Market Alert took the lead with the half-mile in 46.45 with the favorite Dreamer’s Disease, who was rushed into contention after a slow start, in close pursuit. Out of the turn, Market Alert was kept to the inside by Jose Lezcano, fending off a tiring Dreamer’s Disease who took back. But Alvarado set down Hold the Salsa from the outside, where he surged past Market Alert and pressed on as It’s Gravy made his push from the outside.

Hold the Salsa prevailed in hitting the wire in 1:25.70, registering his third win in six career starts.

“I was pretty confident coming into today. He had already won going seven furlongs,” Lugovich said. “He’s a pretty hard horse to gauge because he’s very quiet. Coming into the winner’s circle, he doesn’t look like he has much energy, but he’s a very good horse. He’s just quiet.”

“When he's good, he takes me there,” said Alvarado, who will head to Gulfstream to ride in the winter. “By the 5/16, I was very happy with where he was and the way he was traveling. I knew he was going to have a little something left at the end. He showed up today. I'm happy to have won the last stakes of the meet.”

Lugovich said he might try Hold the Salsa on turf in his sophomore campaign. “It’s interesting because if you look at his breeding, he’s probably a mile-and-a-quarter horse on the grass,” he said. “He’s only a 2-year-old, so he could see that eventually. I’ll see what we can do with him next year and see how he comes up. I’m in no rush with him.”

It’s Gravy, trained by Kelly Breen, maintained his maiden status but has run in the money in all four of his starts, moving to 0-2-2 after besting Market Alert by one length.

Thoroughbred action continues at Aqueduct Racetrack for the 56-day winter meet that begins Thursday, Dec. 10, and runs through Sunday, March 28. In total, 42 stakes worth $4.57 million in purses will be offered, with live racing generally conducted Thursday through Sunday until the end of February with a holiday break set for Dec. 24-27 and the addition of special Monday cards on Jan. 18 for Martin Luther King Jr. Day and Feb. 15 for Presidents' Day.