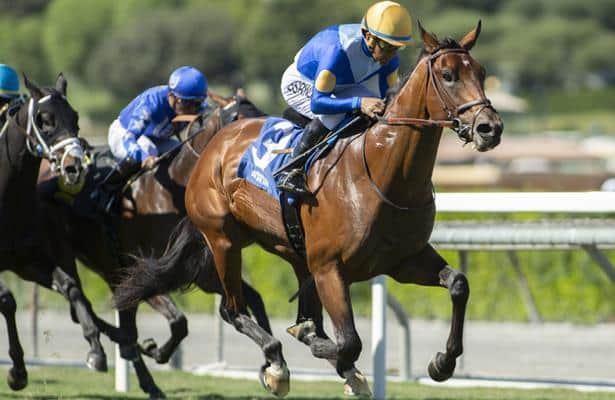 Racing off a layoff of nearly six months and facing a field of older runners, Hit the Road further proved himself Friday with a win in his 3-year-old debut.

The More Than Ready colt was a stakes winner last fall as a 2-year-old who was disqualified in the Breeders’ Cup Juvenile Turf from seventh to 14th due to interference. After a fourth-place run December in Del Mar’s Grade 3 Cecil B. DeMille Stakes, Hit the Road didn’t reappear in the starting gates until Friday at Santa Anita Park.

Under jockey Umberto Rispoli, Hit the Road settled into fourth place early on in allowance optional claiming race going one mile on the turf. Odysseus, the 7-5 favorite, set the pace up front with King of Speed just to his outside.

Hit the Road was still stuck in mid-pack entering the stretch before Rispoli went four-wide to find some running room. The 3-year-old had plenty left in the tank, and he shot to the front to score by a length over Maestro Dearte.

“He was ready to go moving into the turn, but I wanted to save ground and wait a bit,” said Rispoli, who was aboard for the first time Friday.  “This course is firm, so I didn’t want to be too far back, but we got lucky and had a perfect trip. The way he finished, I think he’s going to improve off of this race.”

Off at 6-1 for trainer Dan Blacker, Hit the Road returned $14.20 and topped a juicy exacta that returned $146.90 on a $1 bet. The favorite Odysseus rounded out the trifecta.

Christina Blacker, wife of the winning trainer, explained on TVG’s “Trackside Live!” that Hit the Road appeared Friday against older horses due to a lack of other logical race options.

“Dan was in kind of a tough predicament because the only race restricted for 3-year-olds is the Cinema Stakes in two weeks, and that’s going a mile-and-an-eighth,” the analyst Blacker said. “Dan really feels this horse is better at the flat mile distance, and his next target would be the Oceanside over the opening weekend at Del Mar.

“So he chose this spot today with the longer-range goal in mind and getting him going again today. I think this was the cherry on top, the fact that he did jump up with this victory.”