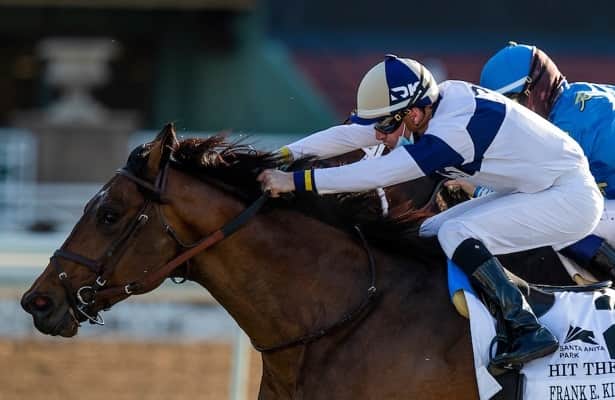 In 2013, in his second year of training on his own, Dan Blacker saddled four runners during Keeneland’s spring meet.

“I didn’t have the right horses then,” the 39-year-old Blacker said Thursday, the morning after he arrived here with what would qualify as a “right horse” in Hit the Road. The Grade 1 winner looms as one of the favorites for Friday’s 33rd running of the $300,000 Maker’s Mark Mile (G1).

A Keeneland sales graduate, Hit the Road brings a four-race win streak into the Maker’s Mark Mile. That skein includes a victory in the Thunder Road (G3), which gave Blacker his first graded stakes triumph, and a narrow win in the Frank Kilroe Mile (G1) for Blacker’s initial Grade 1 tally.

“He’s a really good horse. He’s a Grade 1 winner, and there is not much better than that,” Blacker said.

The Maker’s Mark Mile represents the first venture outside California for Hit the Road.

“A couple things I am looking for is to see how he handles the ship, and I am doing my anti-rain dance,” Blacker said. “I would prefer for it to be firm (turf) tomorrow.”

Heavy rain is forecast for Lexington beginning Thursday afternoon and going until midnight.

Blacker said Hit the Road likely would return to his home base at Santa Anita after Friday’s race and that he would not consider the $1 million Old Forester Turf Classic (G1) at 1 1/8 miles May 1 at Churchill Downs.

Florent Geroux, who was aboard for the victory in the Kilroe, has the mount Friday.