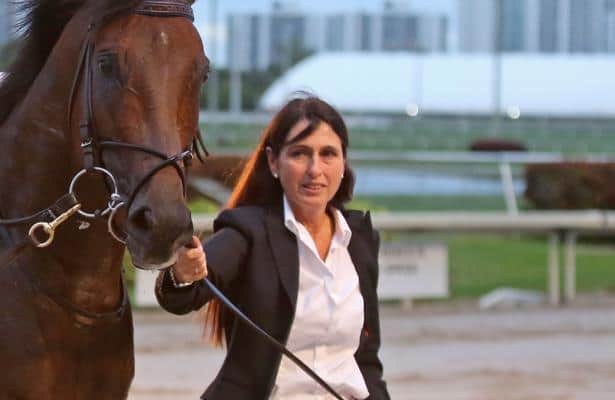 In 2006, Josie Carroll made history when she became the first female trainer to win the historic Queen’s Plate. On Sunday at Woodbine, she will bid for a fourth win in the Canadian classic with Duke of Love.

“The Queen’s Plate, that is the race we as Canadians grow up watching,” Carroll told Horse Racing Nation after Wednesday’s draw. “In that respect, it is very, very meaningful.”

The first Queen’s Plate win for Carroll came with Edenwold at 16-1. She added a second in 2011 with Inglorious and then completed the hat trick when Mighty Heart prevailed in 2020.

Duke of Love, the 5-1 third choice on the morning line, will face 10 rivals Sunday. The Cupid colt was second in the Marine Stakes (G3) at Woodbine on July 2 and came back to be a troubled fourth in the Plate Trial Stakes on July 24.

In that race, which is a furlong shorter than the main event, the chart noted Duke of Love and jockey Justin Stein were “blocked” at the three-sixteenths pole but then rallied late to get fourth.

“This is a horse that has steadily improved this year, and he was pretty significantly blocked in the Plate Trial,” Carroll said. “But what I liked was he had every reason to quit and didn’t. He kicked on afterwards and even galloped out with the winner. That’s really what convinced us he belongs in the Queen’s Plate.”

Duke of Love will break from post 5 with Stein again in the irons.

Campaigned by My Racehorse, Duke of Love has worked twice since the Plate Trial, including a sharp, five-furlong breeze in 1:00.8 over Woodbine’s Tapeta track on Friday.

Carroll said it remains to be determined what tactics are employed Sunday, although “obviously he’s not the kind of horse you’re going to see on the lead.

“We’ll have to sit down and take a look at the (past performances) and where everybody is situated, then take it from there,” Carroll said. “At the end of the day, you break from the gate and then you have to adjust.”

The Queen’s Plate was carded as the 10th of 13 races at Woodbine on Sunday. The scheduled post time is 5:42 p.m. EDT. Being run this weekend for the 163rd time, the Queen’s Plate is contested at 1 1/4 miles on Woodbine’s Tapeta surface and carries a purse of US$773,650. It is restricted to horses foaled in Canada and is the oldest continuously run stakes race in North America.

As for Carroll’s most recent Queen’s Plate winner, 5-year-old Mighty Heart returned to work Saturday following a fifth-place effort on the turf in the Niagara Stakes at Woodbine on July 30. The full horse by Dramedy, who has earned more than US$1.1 million for owner-breeder Lawrence Cordes, is 0-for-4 on the year.

“He’s doing well. We tried the grass (in the Niagara). We wanted to see, sort of based on his sire’s record, what he would do on the grass and we were very pleased with what we saw,” Carroll said. “I think our next foray may be back on that surface.”

Mighty Heart is the two-time reigning Horse of the Year in Canada. He also was champion 3-year-old male in 2020 and champion older dirt male in 2021.

On Saturday at Woodbine, Carroll has a pair entered in the Catch A Glimpse Stakes for 2-year-old fillies going 6 1/2 furlongs on turf. Happy Valentine, by Runhappy, was a debut winner at Woodbine on July 16. Collecting Flatter, a daughter of Flatter, won her first start in June and came back to take the My Dear Stakes July 16, both on Woodbine’s Tapeta surface.

“They both won their debuts nicely " Carroll said.