Hirsch winner Blue Stripe may train up to Breeders’ Cup 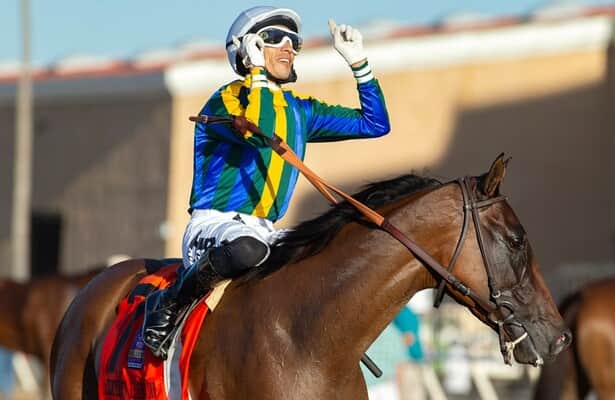 Del Mar, the graveyard of favorites.

Actually, that is Saratoga’s claim to fame, but for at least one race Saturday the moniker applied to the seaside oval.

Blue Stripe came rolling down the lane, cruising past 4-5 favorite Shedaresthedevil to win the Clement Hirsch (G1) and a berth in the Breeders’ Cup Distaff.

Trainer Marcelo Polanco said Sunday morning his mare came out of the race in good order.

“She looked good,” Polanco said. “She was very alert this morning.”

As for the celebration Saturday night, Polanco said he was too busy to party.

“My phone didn’t stop ringing for hours,” the smiling trainer said. “People from South America, people from around here. Texting and calling. It was kind of a freaky night.”

Polanco says a decision about Blue Stripe’s future is pending.

“We haven’t talked to the connections,” Polanco said. “I don’t want to say anything, but I think we’re just going to wait for (the Breeders’ Cup), because she’s run good fresh. But the decision has not been made yet.”

The Clement Hirsch victory was Polanco’s third Grade 1 win in his career. He took the 2003 La Brea and 2004 Santa Monica with Island Fashion, but he said the Hirsch may his favorite.

“This is unbelievable,” Polanco said. “It was a tough race, good fillies, at Del Mar, Grade 1, just unbelievable.”

Trainer Phil D’Amato was just as happy with his horse Desert Dawn, who headed Shedaresthedevil on the wire for second place.

“She came out of the race really well,” D’Amato said Sunday. “She ran against older for the first time, and I thought she held her own and ran a valiant second. She nodded a real nice filly in Shedaresthedevil. We’re proud of her.”

D’Amato had no immediate plans for Desert Dawn, who won the Santa Anita Oaks (G2) this year, but he was eager for her future.

“I think this filly is going to continue to mature,” D’Amato said. “I look forward to running her one or two more times this year and save some for next year.”

D’Amato said the Breeders’ Cup is not necessarily in the plans at this time.

“It’s a possibility,” he said, “but it’s not something we need to get to. Definitely I think that will be our goal next year when she turns four and with a little more experience under her belt.”

The beaten favorite Shedaresthedevil was no worse for wear.

“She came out of the race good,” assistant trainer Marcelo Aquinde said Sunday morning. “She’s always been a quiet filly. We scoped her, and she was clean so she’ll be ready next time.”

Trainer Brad Cox will ship Shedaresthedevil back to Churchill Downs Tuesday and make a decision where she will run next.