Highland Chief pulls off a stunner in Man o' War 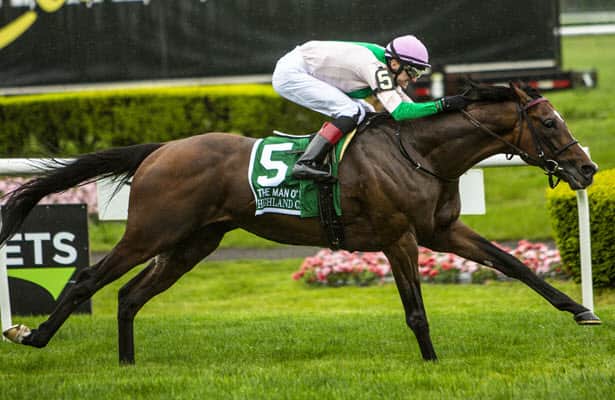 Graham Motion’s Highland Chief took advantage of a paceless renewal of the Grade 1, $700,000 Man o’ War on Saturday at Belmont Park, pulling off a 19-1 shocker in the prestigious turf race, in which he defeated last year’s  Breeders’ Cup Turf victor Yibir and multiple Grade 1 winner Gufo, who on paper towered over the compact field of five.

Juxtaposed with the accomplishments of Yibir and Gufo, Highland Chief still had much to prove in this country. Group 2-placed in England in 2020, the son of Gleneagles made only one start in 2021, a distant fifth-place finish in the Group 1 Coronation Cup at Epsom, and likewise had made just one domestic appearance, which came earlier this year at Aqueduct Racetrack, where he finished ninth after a troubled break from the gate in an optional claimer on April 14.

Undeterred by the Big A effort, Motion and owner Fitriani Hay elected to step the Irish homebred up in class significantly, and it was apparent out of the gate that Highland Chief had his mind on running as he broke well and was headstrong in the nascent stages of the race while jockey Trevor McCarthy got him to rate just off the pacesetter Abaan.

With the scratch of So High the pace was as expected a dawdling one, as Abaan strolled through the opening quarter-mile in 25.35 seconds, a half-mile in 51.84, and three-quarters in 1:18.60, while Highland Chief sat perched just to his outside. Not only was the pace favorable for Highland Chief, but the longshot’s cause was also aided by odds-on favorite Yibir breaking very slowly and being left at the tail of the field, with Gufo, another victim of circumstance, just one spot ahead of him.

Still loping along in close attendance to Abaan through a mile in 1:42.04, Highland Chief began to pick it up around the far turn for McCarthy, but both Yibir and Gufo shadowed that move while four and three-wide on the inner turf course, respectively. With the two favorites looming large as the field exited the bend, Highland Chief was allowed to sneak away and open up a decisive advantage in the stretch, which he was able to maintain all the way to the wire, keeping runner-up Gufo at bay by a length at the finish, with Yibir a neck back in third.

“I wanted to get a good break, that was the most important thing,” said McCarthy, who earned his first Grade 1 victory. “He broke well last time, but he just got annihilated at the break. Today, he was really handy the whole way for me. The pace was pretty slow but the whole time he was just carrying me, carrying me, carrying me. At the five-sixteenths pole I let him go and started to make an early move. I just wanted to get away from the other guys and it sure paid off.”

Highland Chief completed the 1 3/8 miles in 2:17.04 over turf listed as firm despite a steady rain falling at Belmont before and during the race. With just over $126,000 in earnings to his name heading into the race, he nearly tripled his bankroll with the winner’s share of the purse of $375,000 and returned $40.40 on a $2 win wager as the longest shot on the board.

“In fairness, Alex Cole, the manager for the owners, told me that if he runs back to his European form, he’s very competitive with these horses,” said Motion, who last won the Man o’ War in 2005 with Better Talk Now. “He won a race at Ascot. That’s not easy to do. Trevor had a strategy – he knew he couldn’t leave him too much to do. He broke better today, which made a difference because he wasn’t so held back at the start or too much ground to make up. Trevor gave him a great ride. I said to Trevor, ‘I can’t believe somebody broke slower than we did.”

McCarthy said it was fitting he earned his first Grade 1 score in tandem with Motion.

“To win it for Graham, who has given me so much support in my career, it’s really special," McCarthy said. "My father started riding for Graham and we got to be good friends with them and his family. I started at 15 and worked for Graham. As soon as I started to learn how to ride, I stayed at Fair Hill for three years. I would come in on the weekends and days off of school and ride out for him which was great. I learned so much from him and all his employees there at the time. To win it with so much history with him is great."

Ridden by Joel Rosario, Gufo came with his customary late kick, which had propelled him to eight victories from 15 career starts, but the Christophe Clement trainee couldn’t put a dent in the winner’s margin, though he did stave off Yibir in the closing stages.

“I thought he ran a very good race,” Clement said of Gufo. “I thought he moved a little bit earlier than we wanted to in the race because Yibir was moving early so Joel did not want to be boxed in, which I understand. He ran a very game race and ran all the way to the end. Congrats to the winner, who out-finished us.”

Trained by Charlie Appleby for Godolphin, Yibir’s undefeated run in the U.S. came to an end in the Man o’ War. The 4-year-old son of Dubawi won last year’s Jockey Club Derby Invitational at Belmont, in addition to his Breeders’ Cup score, but the poor break and slow pace were too much for the talented chestnut to overcome on Saturday.

“That’s him. He did that [missed the start] here last year,” said Appleby. “That’s his style. He did it in the Sheema Classic as well. We intentionally not want him to be as slow out but his run style is to come off the pace.

“Unfortunately, we had rain here last night and rain again today and it’s just on the slower side of where he likes to hear his feet rattling,” the trainer added. “For his acceleration, it just blunts it slightly. Take nothing away from the winner, he held decent form back in Europe in his 3-year-old career there and he had to be respected. We ran our race, but in an ideal world if you asked me what I’d like to have had, it would be no rain.”

Easter, another Motion trainee with a nearly identical profile to Highland Chief, finished fourth. Pacesetter Abaan completed the order of finish in the 64th running of the Man o’ War, which serves as the first Grade 1 race of the spring/summer Meet at Belmont.