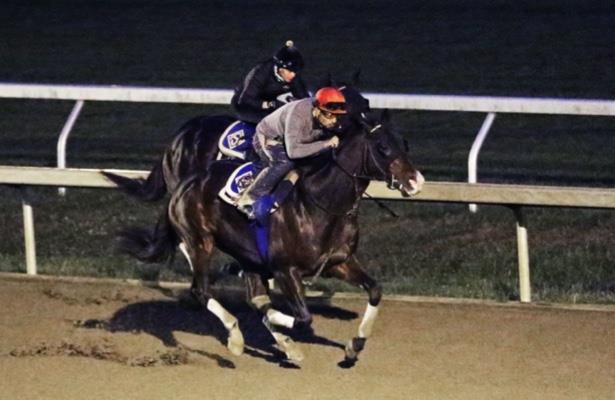 “This was his big work before the Breeders’ Cup (Classic),” said Juan Levya, who was aboard Higher Power. “I am very satisfied with it. He galloped out strong. … I had him in 1:39 for the mile.”

Leyva, who has been overseeing trainer John Sadler’s string of horses at Keeneland, also worked Hronis Racing’s Chaos Theory 5 furlongs over a turf course rated as good in 1:02.80. Fourth in the Grade 2 Woodford, Chaos Theory is under consideration for the $1 million Breeders’ Cup Sprint.

Other grass workers under Breeders’ Cup consideration Sunday morning were Red King (Turf) going 5 furlongs in 1:05 for trainer Phil D’Amato and the Wesley Ward-trained duo of Outadore (:53) and Campanelle (:53.40) in company for a half-mile for a 2-year-old turf race.

Highlighting other dirt works was the first local breeze from probable Breeders’ Cup Juvenile favorite Jackie’s Warrior, who worked 5 furlongs in company with Calibrate in 1:00.20.

Owned by J. Kirk and Judy Robison and trained by Steve Asmussen, Jackie’s Warrior is undefeated in four starts with Grade 1 victories in the Hopeful at Saratoga and Champagne at Belmont.

Also working for Asmussen were Breeders Cup Sprint hopefuls Yaupon, who worked 5 furlongs in company with Little Menace in :59.60 (best of 41 works at the distance), and Echo Town, who worked a half-mile in :47.60 with Juvenile Turf Sprint possible runner Cowan.

Trainer Chad Brown opted to work Breeders’ Cup Mile hopefuls Raging Bull and Flavius together a half-mile on the main track in :49.40. Also going on the dirt for Brown was Front Run the Fed (Turf Sprint), who covered a half-mile in :49.

Sleepy Eyes Todd, under consideration for the Breeders’ Cup Dirt Mile, worked a half-mile in :48.40 under Robby Albarado. The Miguel Silva trainee galloped out 5 furlongs in 1:00.40 and 6 furlongs in 1:14.40.