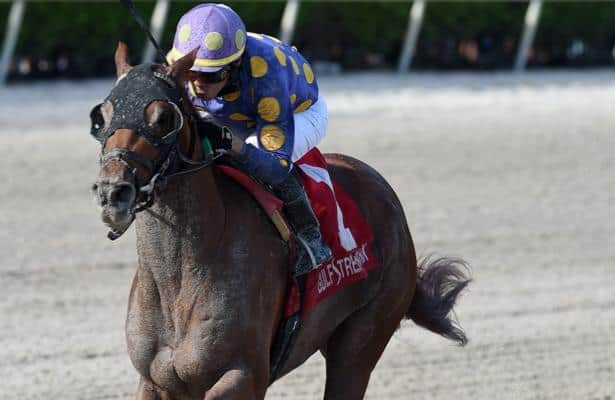 Shivaree is receiving a freshening and will not run in next month’s Arkansas Derby (G1), his trainer said Tuesday.

Ralph Nicks said the Florida Derby (G1) runner-up exited the race healthy, but with the uncertainties of the national racing picture due to the COVID-19 pandemic, the 3-year-old son of Awesome of Course will be taking some time off from training. “I don’t know what’s next,” Nicks said.  With his second-place finish in last month’s Florida Derby, Shivaree received 40 qualifying points toward the 2020 Kentucky Derby, good for 11th in the standings. In most years, 40 points is enough to make a gate in the Kentucky Derby. But with the race postponed to Sept. 5 and more qualifiers expected to be added over the summer, the threshold may reach higher. Shivaree finished second to Tiz the Law in the Florida Derby as an 81-1 logshot. The Jacks or Better Farms homebred earned $144,000 for owners. “He’s very energetic and very entertaining. You know when he’s around,” Nicks said of Shivaree. “He’s very high-energy and a very, very happy horse.” The colt broke his maiden in his fourth try last November at Gulfstream Park West in a seven-furlong sprint on the dirt. “His past performances speak for himself. He started out slow as a 2-year-old. At the end of last year he came around and started putting things together,” Nicks said. “He just keeps progressing.” Following his maiden-breaking performance, Shivaree won back-to-back stakes races at Gulfstream Park -- as a 2-year-old at the end of last November and at 3 in January. He followed with runner-up efforts in the Swale Stakes (G3) and listed Hutcheson Stakes leading into the Florida Derby. Shivaree, who comes from a family of sprinters but stuck around after setting the pace in his longest race to date last out, had been in training since the months leading up to his debut on June 29 last year.  Whereas Shivaree could route again, the Nicks-trained Liam’s Lucky Charm, another 3-year-old in his barn, will shorten up moving forward. The Khozan colt finished ninth, beaten by 21 lengths in the Fountain of Youth Stakes (G2) at Gulfstream Park at the end of February after finishing 10th, beaten by 22 ¾ lengths in a division of Fair Grounds' Risen Star (G2) earlier that month. “His two-turn career is over,” Nicks said. “He’s breezing again this weekend. He’ll be pointed to something either at the end of April or the middle of May.” Nicks said Shivaree and Liam’s Lucky Charm are two different types of colt, but both exude class.  “He’s quiet,” Nicks said of Liam’s Lucky Charm. “A fun horse to be around. He’s a good mover, a pretty horse, and pretty classy.” Liam’s Lucky Charm is a multiple stakes winner in his own right, winning a race restricted to Florida-breds as a 2-year-old before taking Tampa Bay Downs' Pasco Stakes to open his sophomore season. He has earned $342,800 while winning three times in eight career starts for breeder/owner Stonehedge LLC.