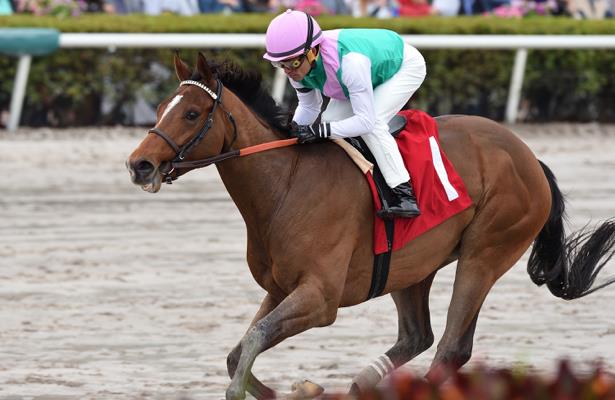 On Kentucky Derby day in 2019, jockey Jose Ortiz hopped off beaten undercard favorite Hidden Scroll and suggested the colt’s future may be on turf. More than a year later, we’re set to find out.

The Juddmonte Farms homebred is prominent in opening Wednesday’s eighth race at Belmont Park, a one-mile allowance that oversubscribed with non-winners of three races. Multiple entries are main track-only, but not Hidden Scroll, a 4-year-old by Hard Spun who has been both brilliant and a bust in his six-race career.

Hidden Scroll, of course, registered a 104 Beyer Speed Figure on Jan. 26, 2019, blitzing his competition over a sloppy track before going favored — and missing the board — in both the Fountain of Youth (G1) and Florida Derby (G1) won by Code of Honor and Maximum Security, respectively.

In his turf debut, Hidden Scroll will have jockey John Velazquez up from post No. 11. As many as 12 can run with two main track-only horses in the body of the field and four others waiting on the also-eligible race as racing resumes in New York for the first time since March.

The horse to beat breaks one post inside of Hidden Scroll. Klaravich Stables’ Value Proposition is 2-for-3, with his only defeat coming when sent straight into Belmont Park’s Pennine Ridge (G3) off a debut victory last season. The Chad Brown trainee was last seen winning a Saratoga allowance on July 18.

Going back to his juvenile season, the 4-year-old Forty Under is a graded winner over the Belmont turf, while the 2018 Royal Ascot winner Arthur Kitt will make his second start for the Christophe Clement barn having run second in a deep April 23 allowance at Gulfstream Park.

Post time is 5:04 p.m. ET with this event running one race before Grade 1 winners Rushing Fall and Got Stormy match up in the featured Beaugay (G3) going 1 1/6 miles on the lawn.