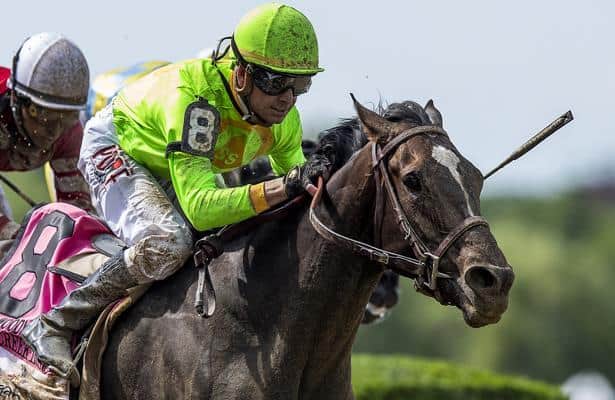 When Hog Creek Hustle gets to the starting gate for the Metropolitan at Belmont Park on Saturday, he’ll be doing so with lofty goals on his back. “To win,” owner Patty Tipton said when asked about what she expected from the 4-year old son of Overanalyze. “We think he’ll run really well and with the right race, if it sets up right for him to come flying at the end, I think he can be right there.” A win would be the first for Hog Creek Hustle since last year’s Woody Stephens (G1), also at Belmont Park, when he beat Nitrous in the seven-furlong run.

Tipton’s reasoning for entering the colt in the Met Mile was simple.

“We kind of got tired of running second at six furlongs,” Tipton said. “We just decided that we were going to take the leap and go for it. We think he can go a mile and we wanted to give him his opportunity.” Owned by Something Special Stables, Hog Creek Hustle finished second in his last out, a seven-furlong allowance at Churchill Downs on May 2. Before that, he was eighth in the six-furlong Count Fleet Sprint (G3) at Oaklawn.

Hog Creek Hustle will face stiff competition in the Metropolitan, going up against the likes of McKinzie, the Bob Baffert-trained 5-year-old who is coming off of a win in the Triple Bend (G2) at Santa Anita. Also in the field is Vekoma, winner of the Carter Handicap (G1) at Belmont Park last out, and Code of Honor, who just won the Westchester (G3), also at Belmont.

But Tipton was unfazed by the others in the field, insisting that Hog Creek Hustle is ready to take on the most difficult of competitors.

“We think he’s worthy of the opportunity, and we want to give him a shot,” Tipton said. “This race means a lot for everyone that’s in it, as far as down the road. Win and you’re in the Breeders’ Cup and your breeding rights are pretty much out there for discussion. We think he deserves the opportunity to try.”