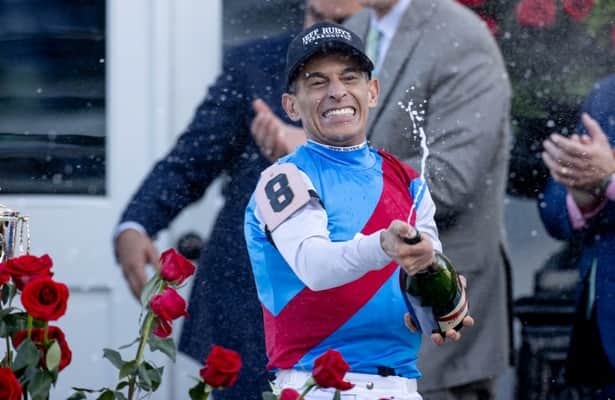 No trainer has put his stamp on Kentucky Derby history more than Bob Baffert, whose win Saturday with a Medina Spirit was a record-setting seventh. Likewise, no Derby jockey has been better in recent years than John Velazquez.

The 49-year-old Velazquez scored the fourth Kentucky Derby triumph of his career Saturday at Churchill Downs. Since the start of the last decade, he has captured the roses aboard Animal Kingdom (2011), Always Dreaming (’17), Authentic (’20) and now Medina Spirit.

Velazquez started his Kentucky Derby career 0-for-12. He now is tied alongside Bill Shoemaker for third all-time among jockeys in Derby wins, trailing only Eddie Arcaro and Bill Hartack (five each).

“I never thought in my wildest dreams that I would win four Derbies," Velazquez said.

Animal Kingdom closed from 12th under Velazquez to win the 2011 Kentucky Derby. He tracked from second aboard Always Dreaming through the opening half-mile before taking over the 2017 Derby.

Now in Velazquez’s last two Kentucky Derby wins, his mount has led at every call. Authentic wired the field last September at 8-1 odds just as Medina Spirit did Saturday while scoring at 12-1.

“Strategy was very simple – break out of there and try to put him in the lead,” Velazquez said.

Baffert, who also trained Authentic, wanted Velazquez to aim for the lead Saturday with Medina Spirit. The Protonico colt won Santa Anita’s Robert B. Lewis Stakes (G3) in January while setting the pace but came home second in his three other stakes starts when failing to make the front.

“Bob sent me a text a week ago that says: ‘Come out running and let him up there,’ ” Velazquez said. “And I had not studied the race yet. And I texted him back and I said, ‘Do you think we can be in the lead?’ He said, ‘Just don't take a hold of him.’

The 147th Running of the @KentuckyDerby @ChurchillDowns presented by @WoodfordReserve is won by Medina Spirit w/ 4x #KyDerby winning jockey @ljlmvel aboard.

Rock Your World topped Medina Spirit on April 3 with a front-running Santa Anita Derby (G1) score and projected to challenge Saturday for the early lead. But that John Sadler trainee was off a step slow, then was jostled and stuck in traffic.

As Rock Your World failed to establish early position, Medina Spirit had no such problems. The colt broke sharply under Velazquez and went straight to the lead.

“I love Johnny because he's so good away from the gate,” Baffert said. “He could have ridden for me at Los Alamitos Quarter Horses. He just lays the gate. That's what you need. I love guys that can just get a horse away from there.”

Medina Spirit set honest early fractions of 23.09 and 46.70 seconds. Mandaloun, Hot Rod Charlie and Essential Quality all tracked the pace setter and were there to challenge into the stretch, with Mandaloun even pulling alongside at one point.

Velazquez and Medina Spirit fought off long shot Mandaloun in a similar manner to how the jockey and Authentic held favorite Tiz the Law at bay in the 2020 Kentucky Derby. They hit the wire a half-length ahead of Mandaloun, stopping the clock in 2:01.02.

“Today, this guy, he did it,” Baffert said of Velazquez. “He's so cool, such a professional. When you work with the guys like him, like the Mike Smiths, they're just so smart. They know every move. They know every horse, what they're going to do. He knew exactly what he was going to do.”

Inducted into the Hall of Fame in 2012, Velazquez shows no signs of slowing down as he approaches 50.

The Puerto Rico native has won nearly 6,300 races in his career and bagged more than $430 million. He can return to Churchill next May attempting to tie the record for Kentucky Derby wins by a jockey.

“I never looked at it and think to try to break records or try to want anything like that,” Velazquez said. “It was a job. I'm very proud about my job. I like to do really well if I get the opportunity. And it has been a blessing.”