‘Just a tank’: Beverly Park gets 13th win in 28 starts this year 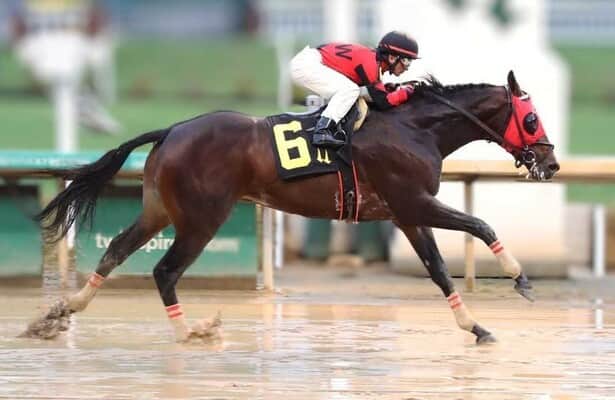 Beverly Park, the wonder horse with 28 starts this year, got his 13th win of 2022 on Monday in a starter allowance race at Mahoning Valley.

“You can't put Beverly Park in with normal horses,” Cash told Horse Racing Nation on Tuesday. “He's just the horse of a lifetime. He's just a tank. He's as sound and healthy as any horse anywhere.”

Barn Tour: Cash plans to run 3 in the Cigar Mile

The 5-year-old son of Munnings had only 10 starts in 2021, but then he didn't have his first race of the year until July.

Cash, who took out his training license in April 2021 and trains only horses whom he owns, has started Beverly Park 36 times since that claim, mostly in starter allowance races. He reeled off six straight wins to start his career with Cash, and seven of his first eight, and he has 20 wins from those 36 starts.

“I just happened to grab his coattails as he was taking off. He's drug me up. I haven't drug him. He's just an amazing horse.”

“Four or five days from now, he'll be trying to tear the stall up. Because he's ready. He's ready to get out and go. He’s just competitive. Again, another reason you can't compare him to a normal horse is, I mean, this horse has put some miles on him too.”

Still, Cash knows that 28 starts this year is a lot.

“People are saying, 'man, you just run him crazy,' " Cash said. "But with Beverly Park, he's running in nickel starters, $5,000 starters. And most tracks write that race. And one reason he travels so much is because sometimes people don't enter that race. Sometimes the race doesn't make. They run the race every couple of weeks at a lot of tracks, but a lot of times they don't make, and Beverly is so strong in those races.

“A lot of times I have to go somewhere to get him a race. Especially now, we're down to two or three tracks that are still writing. We've got Mahoning and Charles Town and I think Parx are the only three writing starter races that he can have started for a claiming price of five thousand or less in the last two years. Some of the tracks have a one-year ban. I know Turfway still writes it, but the time when he ran on the Tapeta track up there, he didn't like the Tapeta. He backed up real soon on that, so we don't take him back.”

Beverly Park's 28 wins are the most for a Thoroughbred in North America since Rapid Redux had 19 in 2011.

North American leaders each year since 2000