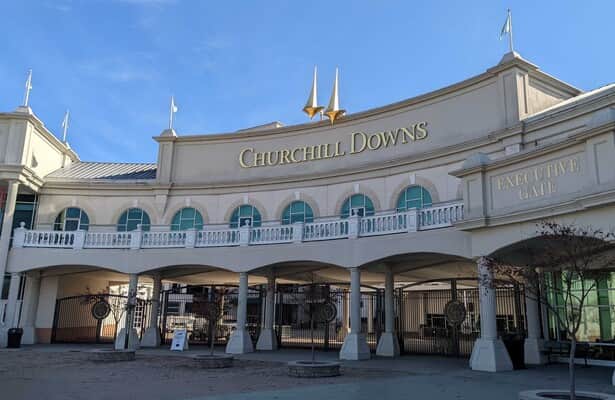 What was a single confirmed case of equine herpesvirus has spread to five horses at Churchill Downs, where movement in and out of the stable area has been suspended until the outbreak runs its course.

The spread of the virus led to O Besos, who was being shipped from Kentucky to New York, to be taken out of Saturday’s Grade 1 Cigar Mile Handicap at Aqueduct, according to Daily Racing Form. It was a precautionary move, since O Besos, who is trained by Greg Foley, had not tested positive for EHV-1.

Track management posted a written statement Wednesday night, the day after a filly trained by Saffie Joseph Jr. was confirmed to have caught the virus.

“Effective immediately, Churchill Downs will restrict movement out of the racetrack’s backside until further notice,” the statement said. “The restriction has been made out of an abundance of caution in light of five confirmed positive tests for equine herpesvirus. The decision follows Tuesday’s news of an index case which led to the immediate implementation of Churchill Downs’ biosecurity protocols including quarantine of the affected barn and additional testing of the 13 exposed horses in that barn. Churchill Downs is working closely and in conjunction with the Kentucky Department of Agriculture to ensure maximum effectiveness of its health and safety protocols throughout the management of this process.

“The five additional horses that have tested positive for EHV-1 are asymptomatic but have been successfully isolated away from the affected barn where they will await a series of further testing. Continued testing of the horses with potential of exposure and those of the affected trainers is under way.

“EHV-1 is a relatively common viral disease that can be managed and is treatable. Additional updates will be made as they become available.”

According to a website hosted by the College of Veterinary Medicine at the University of Florida, “EHV-1 is the type that causes neurologic disease. EHV-1 can also cause respiratory disease, abortion and neonatal death. ... Almost all horses have been infected with EHV-1 by 2 years of age and have no serious clinical effects. Once a horse is infected, the virus can become latent (inactive) in the body resulting in a carrier state with no external signs of disease. Latent virus can be reactivated during times of stress, such as with long-distance travel or strenuous exercise. Current estimates are that at least 60 percent of horses have a latent EHV-1 infection.”