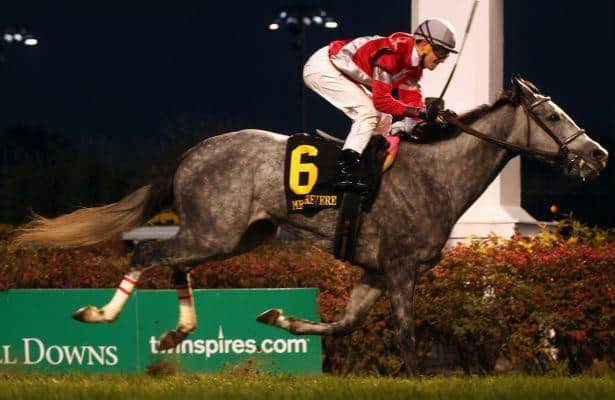 Weights for the handicaps will be released Saturday and entries for the races will be taken Wednesday.
MILESTONE WATCH – Jockey Julien Leparoux is one win away from 800 career victories at Churchill Downs while trainer “Buff” Bradley is one win away from 100 career victories beneath the Twin Spires. … Trainer Dale Romans (688 victories) is 13 wins behind Churchill Downs’ all-time leading trainer Bill Mott (701).
DOWN THE STRETCH – There is a $58,516 carryover in the 20-cent Single 6 Jackpot Friday in races 4-9 at Churchill Downs. … Churchill Downs plans to show on its Big Board and select television monitors throughout the facility choice action from the NCAA Division 1 Baseball Super Regional between instate rivals University of Louisville Cardinals and University of Kentucky Wildcats. The best-of-three series to clinch a trip to the College World Series in Omaha, Neb. will be held Friday-Sunday at noon at nearby Jim Patterson Stadium. All ticket-holders to those games will receive free general admission to Churchill Downs on those game days by showing their ticket stubs – perfect for any post-game celebration. … “Inside Churchill Downs” hosted by Churchill Downs’ Communications Team – John Asher, Darren Rogers and Kevin Kerstein – airs Saturday at 10 a.m. on ESPN 680/105.7. The show will cover all the stakes action at Belmont Park and Churchill Downs with Hall of Fame jockey Jerry Bailey, trainer Brad Cox and handicapper and former U of L basketball player David Levitch. Those outside the Louisville area can stream live on www.espnlousville.com. … The “Who’s the Champ? Handicapping Contest” returns Sunday. Interested participants can enter for $35 ($30 for TSC Elite members) for a chance to win a $1,000 cash voucher first prize by placing mythical $2 win and place bets on Races 3-8. Second place receives a $500 voucher and third place is worth a $200 voucher. Registration takes place between 11:30 a.m. and 1:30 p.m. at the top of the Gate 17 escalators. …There will be no Barn Notes published on Saturday. Barn Notes will return Sunday.