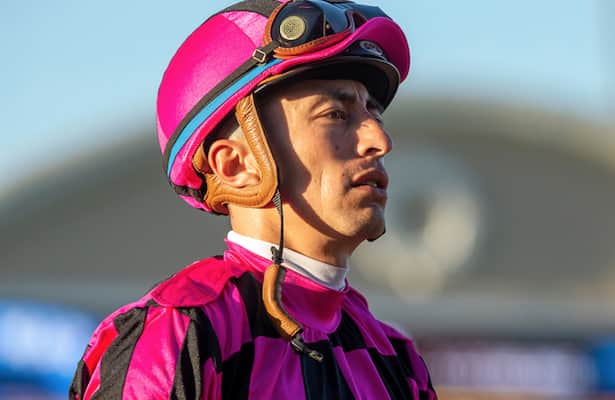 To quote a famous race caller, they would have had to sprout wings to catch Hernandez in the jockey’s race. He started the meet with a victory in the first race on opening day and never looked back, piling up victory after victory. By the end of August, he was up by 16 wins.

Hernandez would extend that lead through the end of the meet, finishing with 49 victories to Umberto Rispoli’s 27. Hernandez won five graded stakes at the summer meet including Saturday’s John Mabee (G2) aboard Avenue de France.

The trainer standings, on the other hand, came down to the last day and the last race. Philip D’Amato went into the day with 19 wins, one better than Bob Baffert. The two were winless through the first eight races until Baffert rung up a victory in the Futurity with Cave Rock.

That knotted the two trainers at 19-wins a piece. D’Amato had one more chance with Flint Stroll in the 11th and last race of the day, and meet, but his horse finished third.

For D’Amato it’s his third summer title at Del Mar and his fourth overall. He shared the title with Richard Baltas in 2017 and won the fall meet title last year. For Baffert, it’s his first title at Del Mar since 2003 when he capped a streak of seven consecutive titles.

Partners Mike Pegram, Karl Watson and Paul Weitman finished first for number of wins and money won for the meet. The trio won nine of their 26 starts, a 35 percent winning mark, and purses worth $849,680 to dominate both categories for the 31-day session. They had an especially sweet final day when their colts Cave Rock and Havnameltdown ran 1-2 in the $302,000 Del Mar Futurity (G1).

Flightline, whose Pacific Classic (G1) win brought him to 5-for-5, was the unanimous choice for best horse of the meet by media members who cover Del Mar racing.