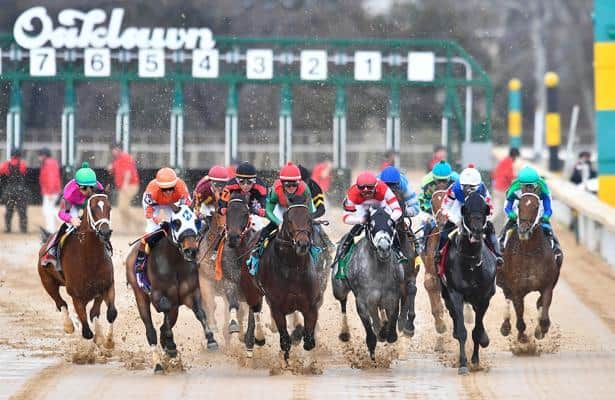 NBC Sports is teaming up with TVG again to broadcast racing on Saturday, and the New York Racing Association and Fox Sports will air races from Oaklawn Park and Tampa Bay Downs.

TVG's Trackside Live will air on NBCSN Saturday and Sunday from 4 to 8 p.m. ET. America's Day at the Races will be shown from 1:30 to 7 p.m.

America’s Day at the Races will be highlighted by the $200,000 Oaklawn Stakes at 9 furlongs for sophomores and the $150,000 Oaklawn Mile for 4-year-olds and up. NBC's coverage will include races at Gulfstream Park.

The top three finishers in the Oaklawn Stakes will earn an automatic berth in the Grade 1, $750,000 Arkansas Derby, set for Saturday, May 2, which offers 100-40-20-10 Kentucky Derby qualifying points to the top four finishers.

Leading the charge in the Oaklawn Stakes, which features a field of 13, is Jackpot Farm's Basin, who captured the Grade 1 Hopeful for Hall of Fame trainer Steve Asmussen in September at Saratoga Race Course. Following a third in his seasonal debut in the Grade 2 Rebel, Basin will look to get back to winning ways against a talented field that includes multiple graded-stakes winner Thousand Words.

Trained by Hall of Famer Bob Baffert, Thousand Words captured the Grade 2 Los Alamitos Futurity in December and the Grade 3 Robert B. Lewis in September at Santa Anita Park. Last out the Pioneerof the Nile bay, out of multiple graded-stakes winner Pomeroys Pistol, finished fourth in the Grade 2 San Felipe on March 7 at Santa Anita.

In the Oaklawn Mile, which drew a full field of 14, Grade 1 winner Tom's d'Etat will look to extend a winning streak that includes scores in the Grade 2 Fayette at Keeneland and the Grade 1 Clark last out on November 29 at Churchill Downs. He will have to topple a talented field that includes the Baffert-trained Improbable, who won the 2018 Grade 1 Los Alamitos Cash Call Futurity ahead of back-to-back runner-up efforts last season in the Grade 2 Rebel and Grade 1 Arkansas Derby at Oaklawn.