Here's how Belmont Stakes officials will set the 2020 field 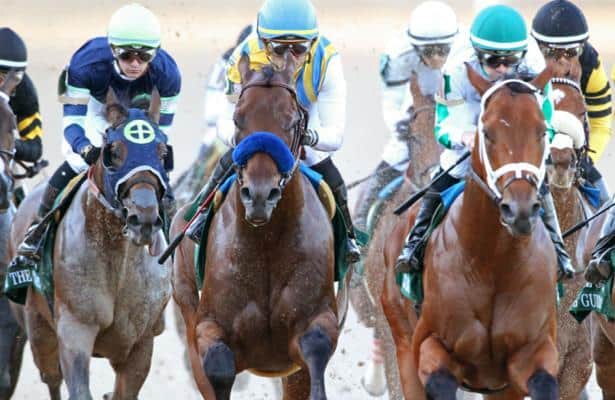 We’ve grown used to Kentucky Derby points determining starters for the Triple Crown series’ first leg, an in-demand race that has drawn more than 20 entries each year since the current qualification system was implemented in 2013.

Next month, as the Belmont Stakes marks the first of American racing’s classics in 2020, fans of the improv comedy show Whose Line Is It Anyway can associate with New York Racing Association officials’ method of setting the field.

As host Drew Carey so often said, “Everything's made up and the points don't matter.”

Thanks to the condition book, parameters to run in the Belmont Stakes are explained below in the event that more than 16 horses are entered:

• The first eight starters will be given preference based on earnings in graded stakes at a mile or longer.

• The next five starters will line up according to non-restricted stakes earnings regardless of the distance. That essentially excludes state-bred company.

• The book specifically reads, however, that qualifying races under this condition offer no restrictions “other than age or sex.” Would connections of a 3-year-old female be more apt to take on the Belmont in 2020, when it measures 1 1/8 miles around one turn?

• So that accounts for 13 positions. If the race oversubscribes, the final three starters would be determined by the “Belmont Stakes Selection Committee.” That group is undefined but would assuredly be tasked with choosing the trio of horses that make the Belmont the strongest field possible.

This, of course, may be all for naught. As many as 13 horses have been mentioned thus far as Belmont Stakes possibilities just inside a month to race day, though there’s no way of knowing who else may be targeting the race. That’s one luxury of the Derby points system each spring.

"In essence, in some ways, the Belmont is going to be the Derby this year,” Jack Knowlton, who manages leading 3-year-old Tiz the Law, said last week. “All of the good horses, and anyone who has aspirations of the Triple Crown will be there. Everyone who had what they thought was a Kentucky Derby horse will be a Belmont horse this year.”

That’s with just a few exceptions, as talented sophomores such as Authentic and Honor A. P. will remain in California for the June 6 Santa Anita Derby (G1), and connections who may have caught “Derby fever” in any other year — think about owners of Basin, Finnick the Fierce and even Maxfield, for example — may remain patient waiting for Keeneland’s July 11 Blue Grass Stakes (G2).

Nominations to the Triple Crown series remain open. According to the NYRA condition book, horses can be supplemented to the Belmont Stakes for $15,000 up until the entry deadline on June 17, the Wednesday before the race.

The other legs of the Triple Crown, the Kentucky Derby (Sept. 5) and Preakness Stakes (Oct. 3), run this fall.